It is no secret that the Kingdom of Saudi Arabia has been witnessing drastic shifts in its politics, culture, economic landscape and social norms recently, especially after the announcement of the Saudi Vision 2030 and the launch of the transnational futuristic Neom City project. However, this was not the kingdom’s first attempt to develop its non-oil economic sectors; which brings us to Prince Abdulaziz bin Mousaed economic city.

The idea of this dream project goes back to the year 2006, when the then-King of Saudi Arabia Abdullah bin Abdulaziz visited the province of Ha’il and ordered the construction and development of a major economic city in it to be named after Ha’il’s first Saudi prince, the late Prince Abdulaziz bin Mousaed.

The city’s purpose was to develop and refurbish the status of Ha’il as an economic center and entertainment hub. The project also aims at providing around 30,000 new job opportunities for the Saudi young youth.

Unfortunately, the execution of the project did not go as planned and some drastic changes have been made to Prince Abdulaziz bin Mousaed economic city plan. In 2014, the Saudi Arabian Economic Cities Authority (ECA) has announced the cancellation of the contract that has been made with the Kuwait-based Al Maal company to develop the city and that the whole city plan has been revised.

As a result of this revision, the proposed area of the project has been reduced by 85% to be 18 million square meters instead of the original planned area of 156 million square meters in the first two phases which are planned to be finished within the next 15 years. According to the director of the ECA, this decision was made as the initial expectations and goals of the project were a bit unrealistic.

The news broke as an unpleasant surprise as the project had already started to attract the attention and interest of many local and regional investors. That being said, the project is certainly still alive and – who knows? – it might get more focus within the huge shifts that take place in the Saudi Arabian society.

So what makes Prince Abdulaziz bin Mousaed economic city project that much anticipated? This can be attributed to several reasons: 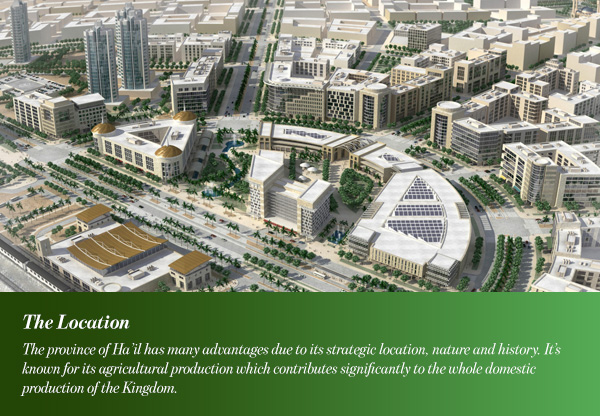 Situated in Ha’il in the northern part of the Kingdom of Saudi Arabia between Aljouf, Tabouk, Madina and Al Qassim regions, the SAR30bn Prince Abdulaziz bin Mousaed economic city was originally planned to span 156 million square meters before it has been reduced to be 18 million square meters.

The province of Ha’il has many advantages due to its strategic location, nature and history. It’s known for its agricultural production which contributes significantly to the whole domestic production of the Kingdom. Ha’il also houses several historical monuments and attractions.

The new economic city will consist of five major sections that aim at meeting the needs of the investors from the different economic sectors and industries through providing high-end educational, agricultural, industrial, transportation and administrational services as well as luxurious entertainment facilities and amenities.

These services will be provided through the five main sections of the city which are: 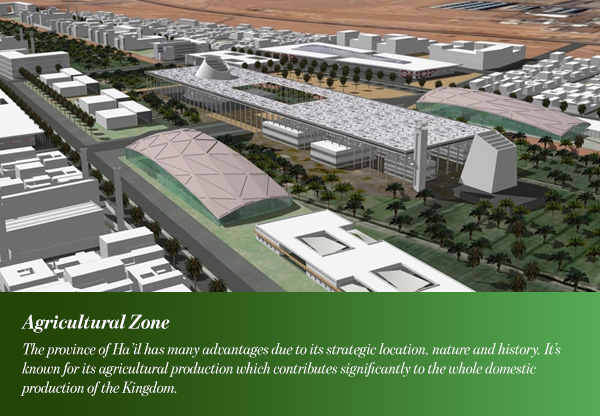 This section aims at making good use of Ha’il’s agricultural nature. Ha’il is known for its abundance of agricultural crops and it contributes a large percentage of the kingdom’s production of key crops like potatoes, wheat, corn and dates.

In addition to that, the zone is rich with mineral resources which will help even more in shaping it as a major investment attraction.

The zone will include also include an advanced center for agricultural researches and studies to help develop and improve the zone’s productivity in terms of both quality and quantity. 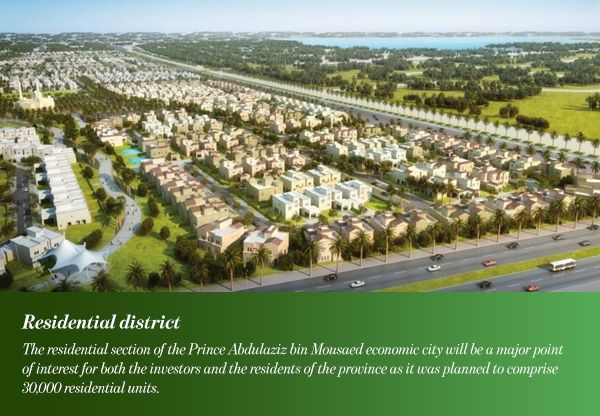 With estimated investments that exceed $2.5bn, the residential section of the Prince Abdulaziz bin Mousaed economic city will be a major point of interest for both the investors and the residents of the province as it was planned to comprise 30,000 residential units with the aim of housing 140,000 people. 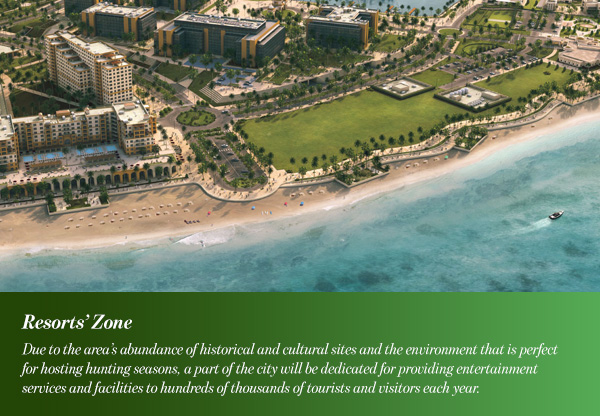 Due to the area’s abundance of historical and cultural sites and the environment that is perfect for hosting hunting seasons, a part of the city will be dedicated for providing entertainment services and facilities to hundreds of thousands of tourists and visitors each year. 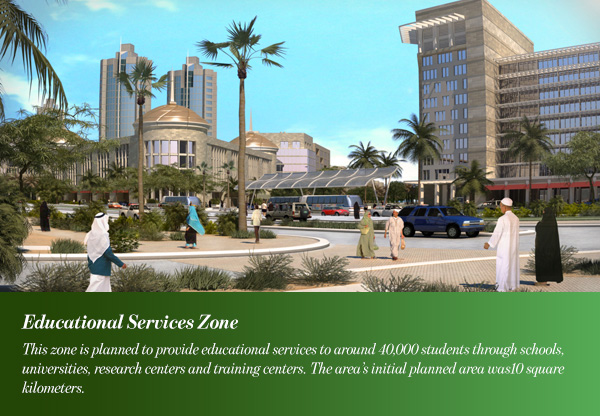 This zone is planned to provide educational services to around 40,000 students through schools, universities, research centers and training centers. The area’s initial planned area was10 square kilometers. 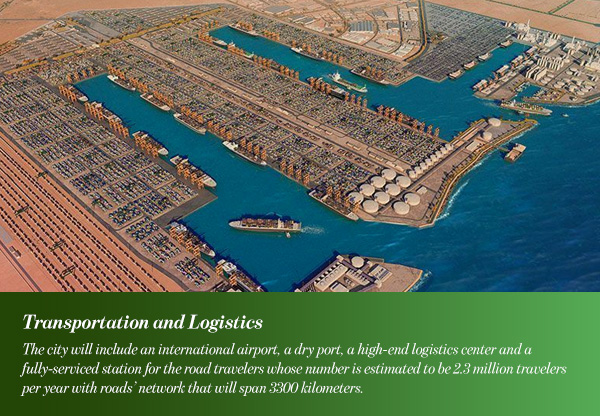 As Ha’il represents a meeting point for multiple trade routes, the city will include an international airport, a dry port, a high-end logistics center and a fully-serviced station for the road travelers whose number is estimated to be 2.3 million travelers per year with roads’ network that will span 3300 kilometers.

It is worth mentioning that the budget of the infrastructure works of Prince Abdulaziz bin Mousaed economic city exceeds $1.6bn. The services will not only aim at meeting the needs of the residents and visitors of the city, but also it will help reduce the load on the services networks of Hail

Does the project have a place in the kingdom’s future?

The Prince Abdulaziz Bin Mousaed Economic City is an ambitious project and the first development of its kind in Ha’il city that aims to help with developing the non-petroleum economic sectors of the Arabian Peninsula’s largest kingdom.

The city can be integrated into the everlasting changes that are taking place in Saudi Arabia. Such changes and shifts have forced themselves on the Kingdom which, as the owner of the world’s second largest share of oil reserves, had to survive through some uneasy damages caused by the downfall of the oil prices especially because of its critical economic dependence on the oil industry.

Thus, it made sense – and we would not be exaggerating if we said it was necessary – for the Saudi Arabian government to decide to abandon their comfort zone and develop the other industries of the economy, with the main focus areas being the real estate market and the clean energy industry, including the Prince Abdulaziz Bin Mousaed economic city project.

The Kingdom of Saudi Arabia is not the first country in the GCC region to decide to reduce its reliance on the black gold. As a matter of fact, it might be the latest country to do that and follow suit of its neighbors in order to maintain its competitive advantage.

Due to the region’s strategic location at the heart of the world’s most vital trade routes, this competition is expected to get even fiercer in the upcoming years. Most of the GCC countries are now working on developing their own economic cities to help brand itself as the best investment and tourism attraction in the region.

Because of that, it is believed that the work on Prince Abdulaziz bin Mousaed economic city project, albeit minimized, will continue through the upcoming decade.