No doubt all children are fascinated by cartoon shows and animated movies, or they have been at one point or another. Maybe even a lot of them have dreamed about living inside their favorite cartoon show in happy cartoon houses with their beloved characters.

However, most of these children grow out of their fascination with cartoons as they grow up.

Although apparently not all of them do, some people kept that fascination and dream alive. Some people around the world even went as far as creating real life replicas of cartoon houses and making that dream a reality.

Do you love cartoons?

Do you love uniquely designed houses?

Would you live in one of those cartoon houses?

Check these cartoon houses here with us, you may be inspired to design your own cartoon dream house. 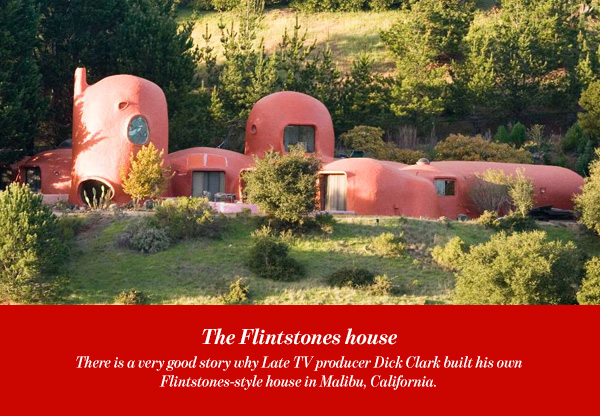 There is a very good story why Late TV producer Dick Clark built his own Flintstones-style house in Malibu, California.

The story goes that a wildlife conservation group did not want Clark to build a house on that land and Clark was very adamant about doing so.

Phillip Jon Brown, the architect who designed the house, was able to help both sides reach a compromise when he suggested building a home that looked like a natural rock formation.

This real life version of the Flintstones’ home is built on more than 22 acres, and it has several large glass windows offering views of the Boney Mountains, the Channel Islands and the Pacific Ocean.

After Dick Clark passed away his widow sold the house. 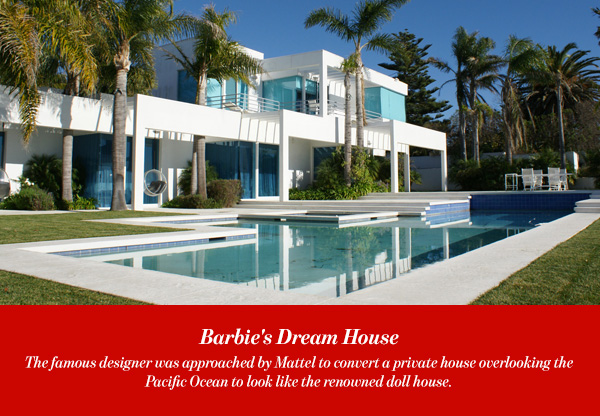 The famous designer was approached by Mattel to convert a private house overlooking the Pacific Ocean to look like the renowned doll house.

From start to finish, the house took six months to assemble. Adler used pieces from his famous furniture line and designed some unique items to outfit the rooms.

Although the house was torn down after the event, Adler’s Barbie dream will live on.You can even buy some of the home accessories Adler specifically designed for the Barbie house from his furniture line. 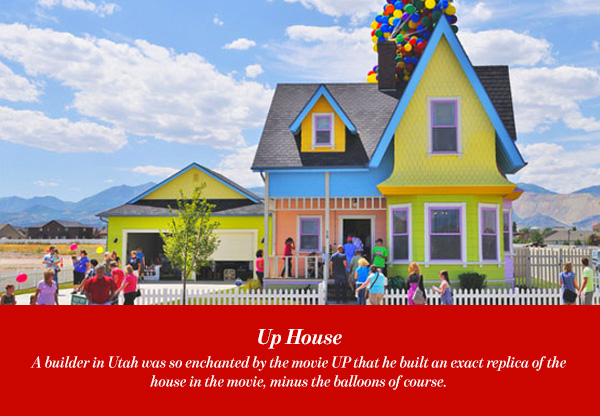 One of the most popular animated movies ever made is the inspiration behind this unique house.

A builder in Utah was so enchanted by the movie UP that he built an exact replica of the house in the movie, minus the balloons of course.

The house looks and feels like an authentic 50’s style home, everything was replicated from the movie, even the painting that Ellie did over the fireplace, and even Carl and Ellie’s chairs had to be costume made to look exactly like the chairs in the movie.

Disney gave permission to the builder under one condition: They can only make one ‘UP’ house. 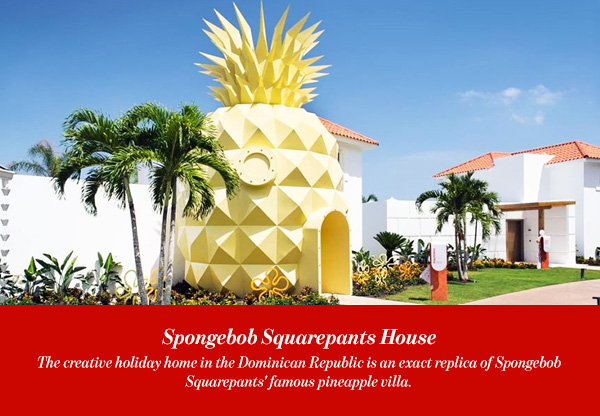 This creative holiday home in the Dominican Republic is an exact replica of Spongebob Squarepants’ famous pineapple villa.

It was created by kids’ TV channel Nickelodeon and the Nick Resort Punta Cana, everything in the place matches the beloved cartoon character’s house.

The house may not be under the sea like Spongebob’s, but you get a private pool as a very nice compensation. 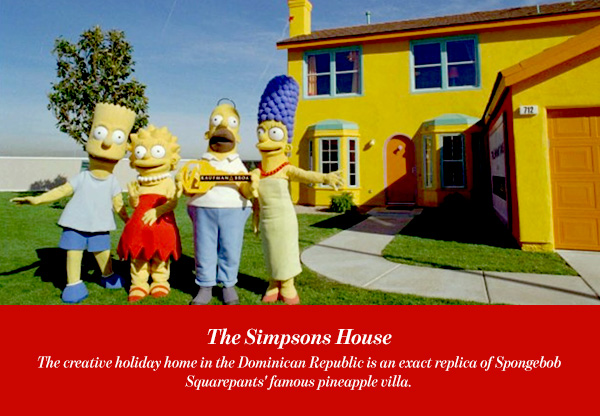 An exact replica of the Simpsons house was built in 1997 and the decorators took such care and precision that they invested nearly 50 hours to watch 100 episodes to get everything just right.

The house was built as a prize to a contest at the time. Fox and Pepsi held a competition and the winner would be awarded a life-size replica of The Simpsons house, or cash.

Sadly though, the winner at the time opted for the cash and the house was then repainted and stripped of all the interior decorations and converted into a regular house. What a waste! 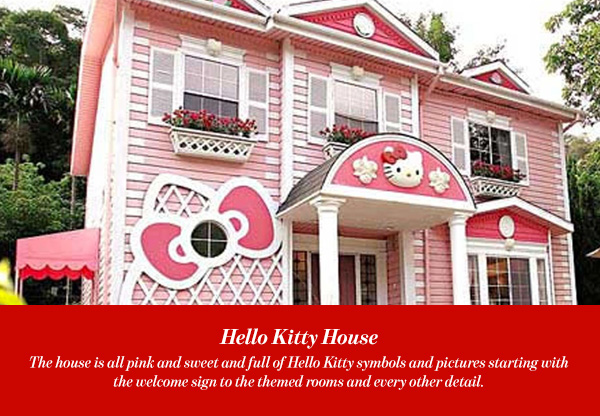 This marvelous Hello Kitty themed house was built in Shanghai, China.The house is all pink and sweet and full of Hello Kitty symbols and pictures starting with the welcome sign to the themed rooms and every other detail.

There are other Hello Kitty houses around the world, apparently fans cannot get enough of the famous Japanese kitty.

Unusual Architecture: The Most Unique Houses Around The World