Are you wondering where to stay? What is the best region in Bahrain for you to live in? Moving to Bahrain from any country is a big step. You might have a job abroad that requires you to move here, or you might want to go to college. It might mean that your partner’s job means that you also have to move, or maybe you join the family who already lives here. Fortunately, a suitable area to live in, to a great extent, can be chosen before departure. The first thing to understand about Bahrain is how to describe the different regions. The main cities are Manama, Riffa, Sanad, and Isa Town with different regions, each with their own infrastructure, feeling, and very individual identity. Bahrainis are beautiful people, and not only in terms of appearance. They have an inner beauty that explodes with a passion for everything they do. Whether it is a friendly greeting. The people of Bahrain can inspire every day with their charity, kindness, and hospitality! Where to search for real estate in Bahrain is an important question.

There are many different areas to live in Bahrain and each one fits a different lifestyle. It is best to think about whether you would like to be close to your office, the road to Saudi Arabia or near all bars, or anything else, and then hunt your home accordingly. Here are some of the most popular places expatriates choose and why they choose these places?

Where to search for real estate in Bahrain? 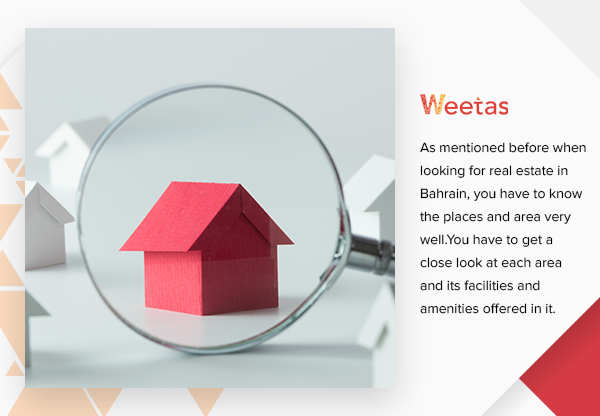 You have to get a close look at each area and its facilities and amenities offered in it. The majority of the housing is found in the north of the island.

The main areas that expats like to live in are many, but we will give you in this article a close look at some of Bahrain’s popular areas.

Some expats live in Saar, Budaiya, and Hamala which are located in the northwest of the island, and close to the Causeway to Saudi Arabia, while others chose the Seef area and Reef Island in the central northern area, which is very close to Manama, the shopping malls and the Financial Harbor.

Adliya and Juffair in the northeast of the main Bahrain Island, are close to the US Naval base, where plenty of expats prefer to live there, as they offer a very vibrant luxurious lifestyle.

Also, Riffa and Riffa Views are in the center of the island, where you can be close to all other areas in Bahrain. Last but not least, Hidd and Amwaj Islands are both located on the island of Muharraq, and close to the airport, so many expats like to enjoy the sea view offered by them.

This is not an exclusive list of areas but here is a close view of where to search for real estate in Bahrain? 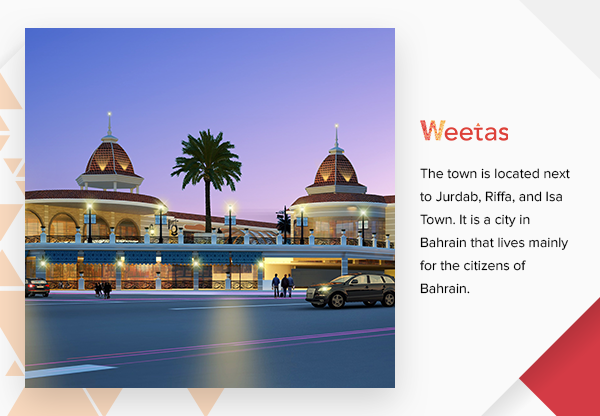 The town is located next to Jurdab, Riffa, and Isa Town. It is a city in Bahrain that lives mainly for the citizens of Bahrain.

However, many expats live in this city. Sanad is divided into four parts: the old Sanad, the new Sanad, and Al Nasfah, as well as the Istiklal highway, which is a major highway linking the cities of Askar with Isa Town and Riffa.

Sanad hosts many facilities and amenities. It includes some of the restaurants such as Yum Yum Tree, Papa Johns, KFC, McDonald’s, Dairy Queen, and Hardee’s.

Also, in the summer of 2007, Jawad Centre opened, and it hosts Jawad supermarket and shopping stores. As well as GU (Gulf University) also headquarters in Sanad. 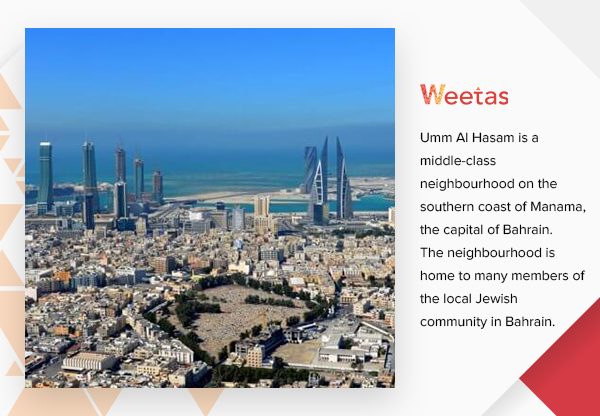 Umm Al Hasam is a middle-class neighborhood on the southern coast of Manama, the capital of Bahrain.

The neighborhood is home to many members of the local Jewish community in Bahrain. It consists of a mixture of major villas and newer apartment buildings and is known for its Lebanese and Indian restaurants.

Umm Al Hassam maintains its leftist traditions through the large headquarters of the National Democratic Action located there. 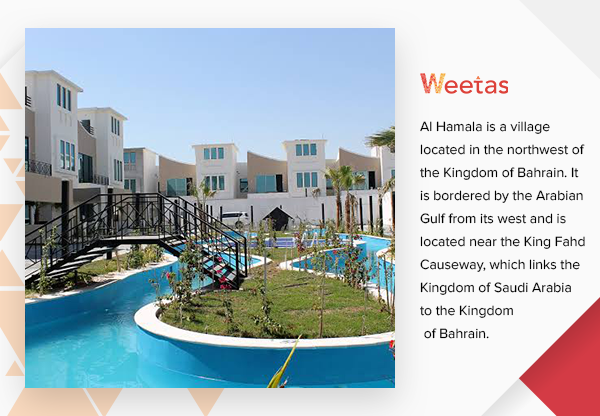 Al Hamala is definitely one of the best options when searching for homes for rent in Bahrain if you want to live in a quiet area overlooking the Arabian Gulf and located a few minutes away from the Kingdom of Saudi Arabia.

Hamala is home to many hotels and resorts such as Dana Homes Resort, Hamala Beach Resort, and Nordic Homes Resort. As for shopping, there is the Hamala Hills Mall which includes a variety of retail stores, outlets, restaurants, and cafes like Otto, Plant Café, Caribou coffee, Al Jazeera Supermarket, etc.

In addition, Hamala has a large share of administrative facilities such as Batelco, Bahrain’s leading telecommunications company, headquartered in Al Hamala. Also, the Ministry of Defense (Training Centre) is located in Hamala.

We mention here that Al Hamala has many schools and pre-schools such as the British School in Bahrain, the Puri Primary School for Boys, the Pre-School International School, Etonhouse, the Kinder World Preschool, and the Vateel Bahrain School – The International Hospitality School, and more! 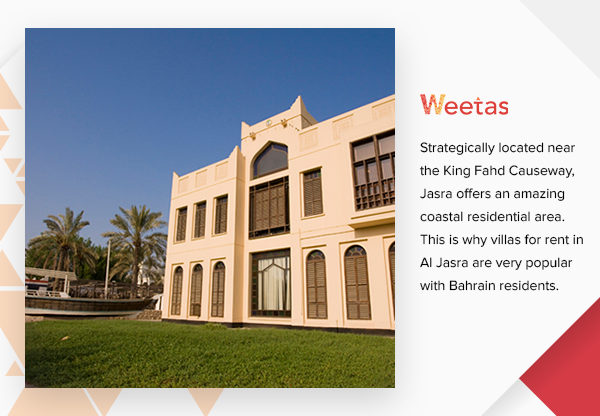 This is why villas for rent in Al Jasra are very popular with Bahrain residents. Jasra is one of the most popular residential areas in Bahrain.

The area is characterized by many elegant complexes and apartment complexes. Villas in Al Jasra are considered one of the most elegant villas in the Kingdom of Bahrain.

Al Jasra offers a look at the traditional arts and crafts that historically produced many ancient villages in Bahrain through the Al Jasra Handicraft Centre.

Another landmark in Al Jasra is the Al Jasra House, which is a traditional style house built by Sheikh Hamad bin Abdullah Al Khalifa in 1907 and later adopted as a summer residence for Sheikh Salman bin Hamad Al Khalifa.

This traditional Jasra house was restored in 1986 using traditional building materials such as palm tree trunks and coral stones. Since Jasra is a coastal region, and since it was a village in the past, Jasra offers great sea views and beautiful greenery.

Join your life in this quiet area. The Janabiya region is located in the northwest of Bahrain, near the Gulf of Bahrain.

It is located south of Bani Jamra and to the west of Saar. It is located in the administrative area of ​​the northern governorate of the country.

The Janabiya area is one of the most important heritage sites in the country. Residents will enjoy direct access to Sheikh Isa bin Salman Highway, where they offer a quick trip from Manama or a direct trip to Saudi Arabia.

It is a good place in Bahrain where there are many restaurants, cafes, hotels, hospitals, and shopping centers, and it is easily accessible from the highway leading to Manama, Saudi Bridge, Riffa. Also, it is close to Bahrain Airport.

Janabiya area hosts many resorts and fitness centers. When you live in Janabiya, Bahrain, you will find the Royal Beauty Farm, the Diraz Temple, the Barber Temple, and the Bahrain Museum and Castle.

Types of properties you may find in Bahrain 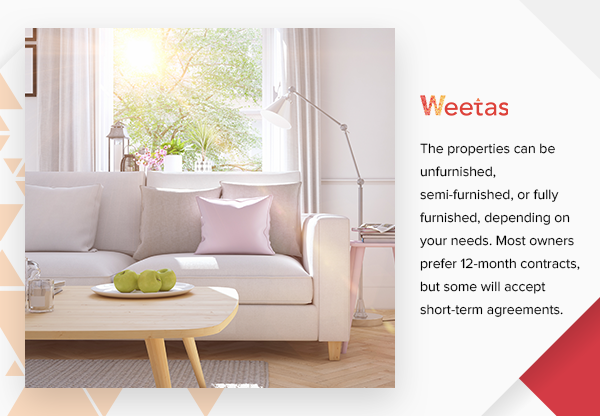 The properties can be unfurnished, semi-furnished, or fully furnished, depending on your needs. Most owners prefer 12-month contracts, but some will accept short-term agreements.

Usually, there is an “exit” clause in most contracts that allows you to terminate the lease early if you can prove that you are leaving Bahrain, that is, to move.

Check this when signing up. Some rents are “inclusive”, such as electricity, WiFi, TV, etc., while some are “exclusive”. Make sure that you fully understand the bills that you may have prior to the lease before signing the lease agreement.

The types of properties available vary between studio apartments, villas, and properties within “complexes”.

The complex is a shared living arrangement in the Middle East – Gate Ownership and Security Surveillance, with many homes (usually between dozens to 30), and are often built around a common area including a shared pool, children’s playground, tennis courts, gym and some in Sometimes “party room”.

Jobs in Bahrain: how to find a job in Bahrain online

Moving Furniture: Make your moving to a new home in Bahrain easy