It is sometimes nice to get a bit off of the beaten path and experience the cultural and natural wonders of the world, especially if it means fewer crowds. There are some stunning travel destinations in the world that most people have never heard about.

So for your next vacation, instead of going  to that place you have heard a million people talk about, try one of these hidden gems and discover a unique experience.

Here is a list of the most unusual stunning travel destinations around the world, most people have never even heard of those destinations. 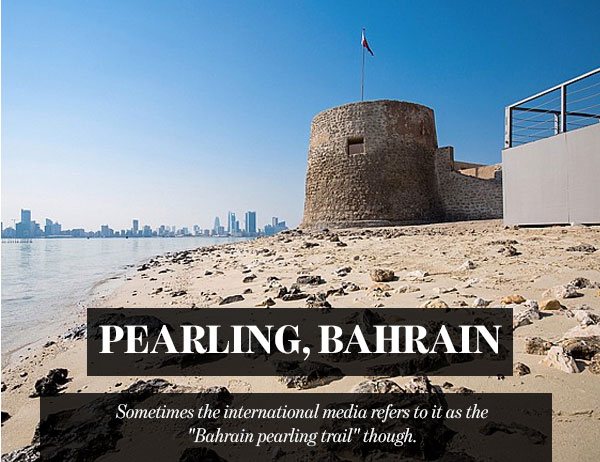 This stunning place  consists of 3 oyster beds in the Bahrain northern waters, a segment of the coast and the seafront Bu Mahir fortress in the southern tip of Muharraq, and 17 buildings in Muharraq historical town connected by a 3.5 km visitor pathway.

The Site was inscribed under the label: “Pearling, testimony of an island economy” by the Bahrain Ministry of Culture. It is definitely one of the most stunning places in the region.

Sometimes the international media refers to it as the “Bahrain pearling trail” though.

The Site was inscribed as a UNESCO world heritage site in 2012 and is Bahrain’s second World Heritage Site after the Bahrain Fort. 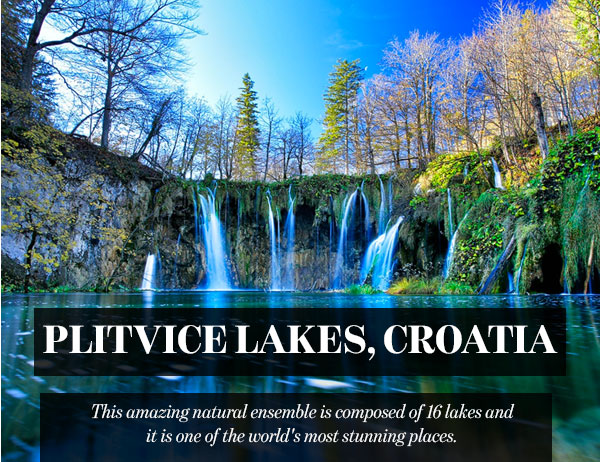 Of all of the waterfalls in the world, none are quite as extraordinary or stunning as those at Plitvice.

This amazing natural ensemble is composed of 16 lakes and it is one of the world’s most stunning travel destinations.

The lakes are all interconnected and follow the water flow. The sixteen lakes are separated into an upper and lower cluster formed by runoff from the mountains.

The lakes are renowned for their distinctive colors, ranging from azure to green, grey or blue. The colors change constantly depending on the quantity of minerals or organisms in the water and the angle of sunlight.

In 1979, Plitvice Lakes National Park was added to the UNESCO world heritage register. 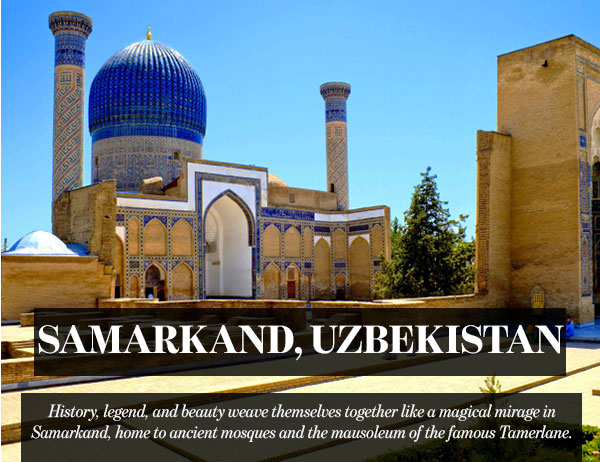 History, legend, and beauty weave themselves together like a magical mirage in Samarkand, home to ancient mosques and the mausoleum of the famous Tamerlane.

The historic town of Samarkand, located in a large oasis in the valley of the Zerafshan River, has a history of over two and a half millennia. Evidence of settlements in the region goes back to 1500 BC.

Titled by UNESCO as the Crossroads of Culture, this city is one of the stunning places which exemplifies the wonders of the Silk Road. 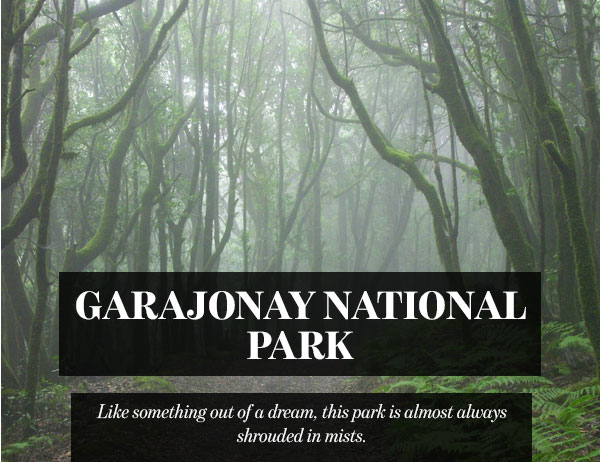 Like something out of a dream, this park is almost always shrouded in mists. Making this land of twisted evergreen trees and delicate flowers seem like a completely separate reality. It is one of the most stunning travel destinations around the world.

There are about 2000 species of plants in the Park, and we must highlight the high number of endemic species unique to this particular island and to the rest of the Canary Islands.

The stunning park of  Garajonay is a dense forest often surrounded by a sea of clouds that gives the forest a magical aspect.

These fogs are vital for the forest, producing the necessary moisture essential for the survival of this lavish green environment

It was declared a world heritage site by UNESCO in 1986. 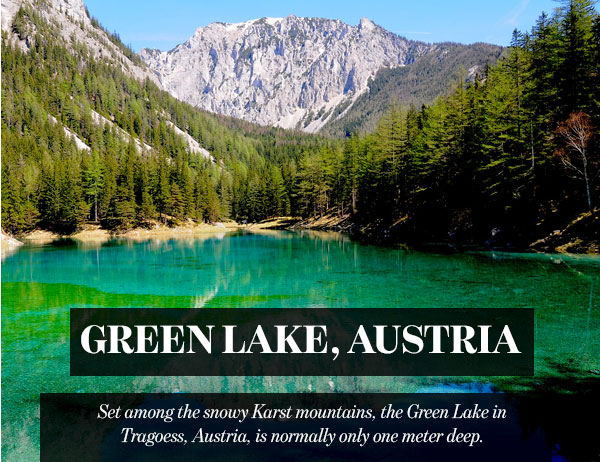 Throughout the winter, this valley is mostly a park with a small lake, but when the warmth of spring comes the valley fills with the clearest of water to create a fleeting underwater kingdom.

Set among the snowy Karst mountains, the Green Lake in Tragoess, Austria, is normally only one meter deep.

For most of the year, visitors to the beauty spot can leisurely stroll around the picturesque lagoon, enjoying the stunning landscape from one of the benches set near the water’s edge.

But every year when the snow melts, the lake floods and submerges everything surrounding it.

Diving in this stunning place is possible only for a month in the spring and it is like swimming in a magical world. 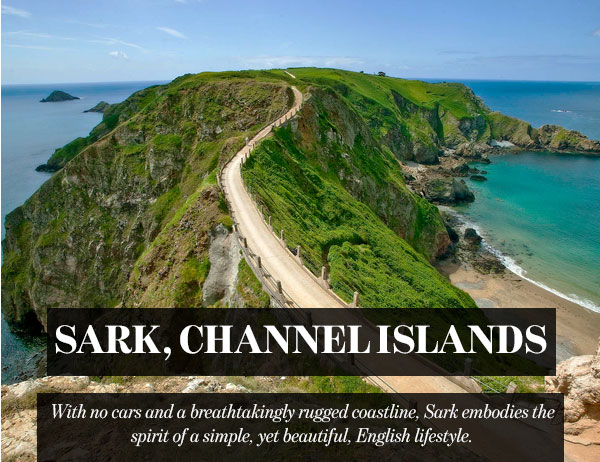 With no cars and a breathtakingly rugged coastline, Sark embodies the spirit of a simple, yet beautiful, English lifestyle.

Not part of the United Kingdom nor the European Union, Sark is reputed to be the smallest independent feudal state in Europe.

Dotted with centuries-old farms and boasting a quaint village, this is the ultimate escape from hectic modern life. 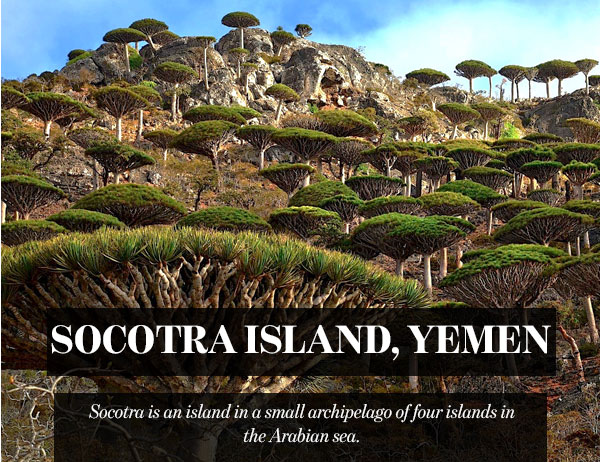 Socotra is an island in a small archipelago of four islands in the Arabian sea. The territory is part of Yemen and had long been a subdivision of the Aden Governorate. It is by far one of the most unusual, and the most stunning travel destinations.

The island is very isolated and a third of its plant life is found nowhere else on the planet. It has been described as “the most alien-looking place on Earth.”

The climate is harsh, hot and dry, and yet – the most amazing plant life thrives there.

UNESCO has declared this island a World Natural Heritage Site. It is a quiet and peaceful enclave in an otherwise troubled world.

If you decide to visit this stunning place, you can forget about beachfront hotels and restaurants; this island is geared towards ECO-tourism and sustaining the local economy and way of life.