Most people strive for uniqueness, architects included. Nowadays, most developers look for architects who will provide them with unique designs. And as a result, we are seeing more and more weird buildings. Khaleeji architecture in specific has been aiming towards record-breaking buildings for the past couple of decades.

The question is, when does this ambition to stand out go too far? Are all weird buildings beautiful?

When we take a look at weird buildings in the GCC, especially buildings built within the last two decades, are all of them good looking? Or, are some of them ugly?

Let’s take a look at modern Khaleeji architecture and check some of the really weird buildings in the GCC to see for ourselves. 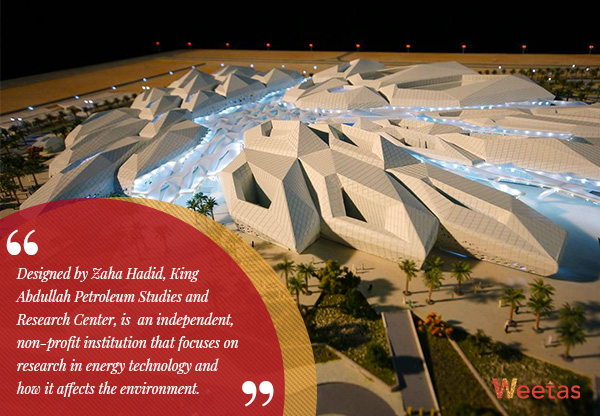 Designed by Zaha Hadid, King Abdullah Petroleum Studies and Research Center, is  an independent, non-profit institution that focuses on research in energy technology and how it affects the environment.

We are not really sure if we love the design because it was designed by Zaha Hadid or if we love the building because of its sustainability. No matter what the reason is, this is our favorite among all weird buildings in the GCC.

The center is specifically designed to minimize energy and resource consumption, as per the environmental conditions of the Riyadh Plateau. The building has been awarded LEED Platinum certification by the US Green Building Council.

The unique design integrates different departmental buildings in a single ensemble with interconnecting public spaces. It looks like a crystal honeycomb that has naturally emerged from the golden desert.

The futuristic building allows for future expansion without compromising the design by simply adding more cells to the honeycomb. It is a building that was built to last. 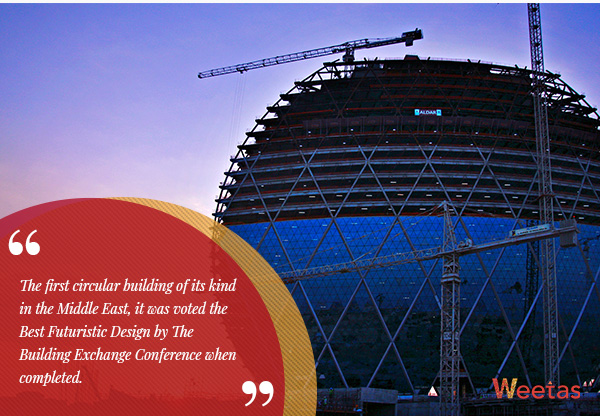 One of the leading real estate developers in the GCC, Aldar apparently felt a need to stand out when choosing a design for the company’s headquarters. The building stands out in a good way though.

The first circular building of its kind in the Middle East, it was voted the Best Futuristic Design by The Building Exchange Conference when completed. This building resembles the good side of uniqueness in Khaleeji architecture.

The semi-spherical building comprises of two circular convex shaped facades linked by a narrow band of indented glazing. It was designed by MZ Architects.

The building has caused many architects to question what they have learned about rules that cannot be broken. The circular building challenges the approach to construction by questioning the typical four sided buildings with a roof structure. 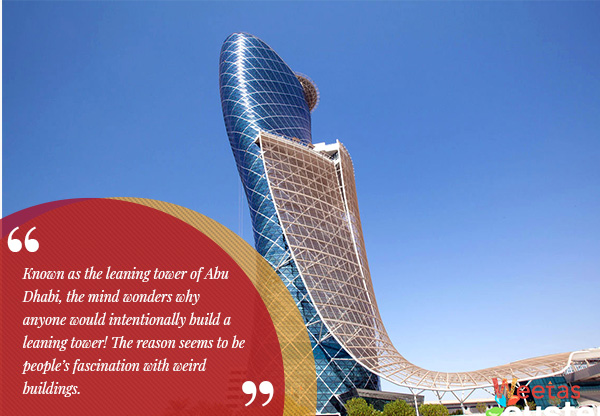 Known as the leaning tower of Abu Dhabi, the mind wonders why anyone would intentionally build a leaning tower! The reason seems to be people’s fascination with weird buildings.

The Capital Gate tower was designed by architectural firm RMJM. It has been built to lean 18° west. In 2010, when the construction of the tower was complete, Guinness World Records certified Capital Gate as the farthest manmade leaning building in the world.

The design is supposedly inspired by sea waves and sand dunes. And no one can deny its innovation. The question is though, is the futuristic tower too innovative? 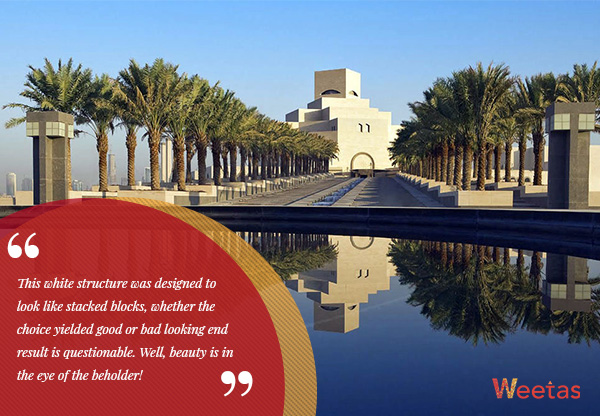 This white structure was designed to look like stacked blocks, whether the choice yielded good or bad looking end result is questionable. Well, beauty is in the eye of the beholder!

It is built in a stunning location overlooking Doha Bay, on an artificial peninsula near the traditional dhow harbor.

The museum was designed by the renowned Chinese American architect I. M. Pei. According to the architect, to draw inspiration for his design, he traveled around Muslim countries for a six-month long journey to learn about Muslim architecture. He finally found his inspiration in the light fountain in 9th century Ibn Tulun Mosque of Cairo. 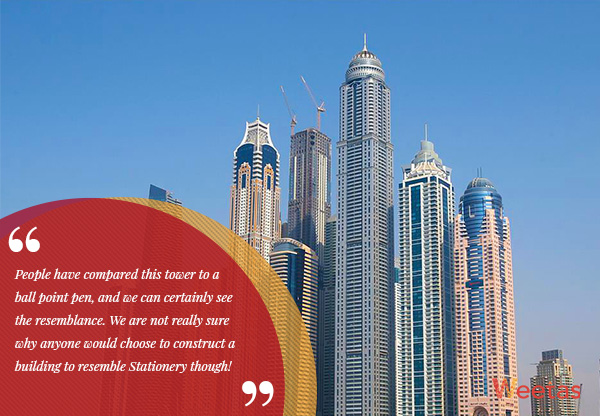 People have compared this tower to a ball point pen, and we can certainly see the resemblance. We are not really sure why anyone would choose to construct a building to resemble Stationery though!

The tower sits atop a podium which houses a six-story-high entry hall full of extravagant geometric designs. The structure of the tower on top of the podium features an octagonal shape made of exposed white concrete and tinted blue glass. The glass and concrete façades gather in a dramatic pointed spire at the top of the building. 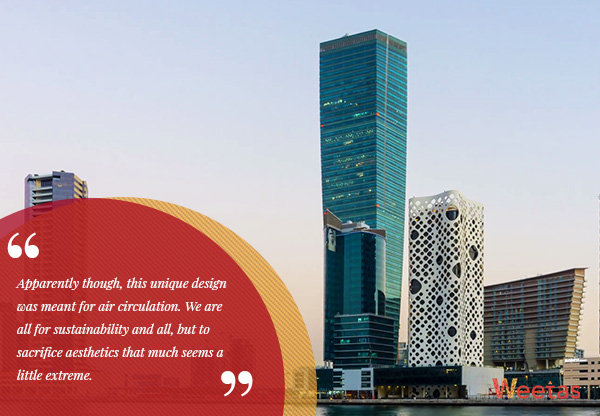 Nicknamed the cheese grater, this tower indeed looks like one!

Apparently though, this unique design was meant for air circulation. We are all for sustainability and all, but to sacrifice aesthetics that much seems a little extreme.

To be fair, the building has won several awards for sustainability. Nonetheless, it stands out in the magnificent Dubai skyline, and not in a good way.