Even though it is a small country, but one of the trends shaping the real estate market in Bahrain is its gleaming skyscrapers and its sky-high beauties.

Adding a splash of beauty to its skyline, some the highest towers in Bahrain are a true definition of architectural brilliance.

From luxurious residential towers to commercial complexes; here is a list of the 7 highest towers in Bahrain.

So what is the tallest building in Bahrain? 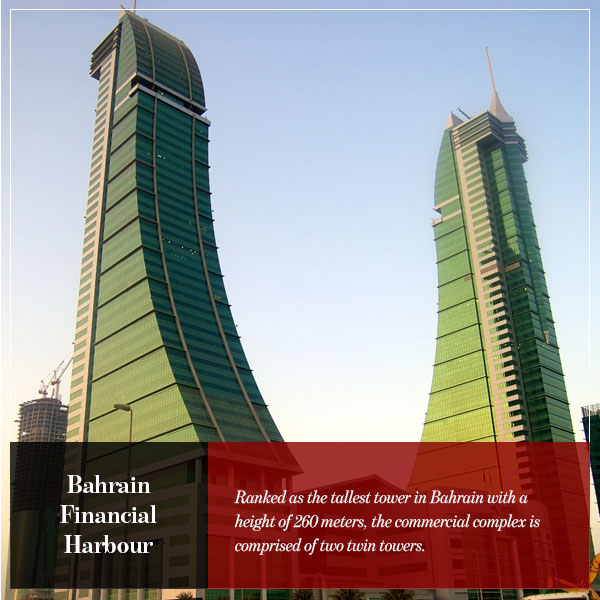 A commercial complex comprising two twin towers consisting of 53 floors each, Bahrain Financial Harbour stands currently as the tallest tower in the Kingdom of Bahrain with a height of 260 meters since its completion a decade ago in 2009.

The complex is considered one of Bahrain’s landmarks located in Manama.

Built on reclaimed land, the building lies near King Faisal Highway and is only 10 minutes from Bahrain International Airport. 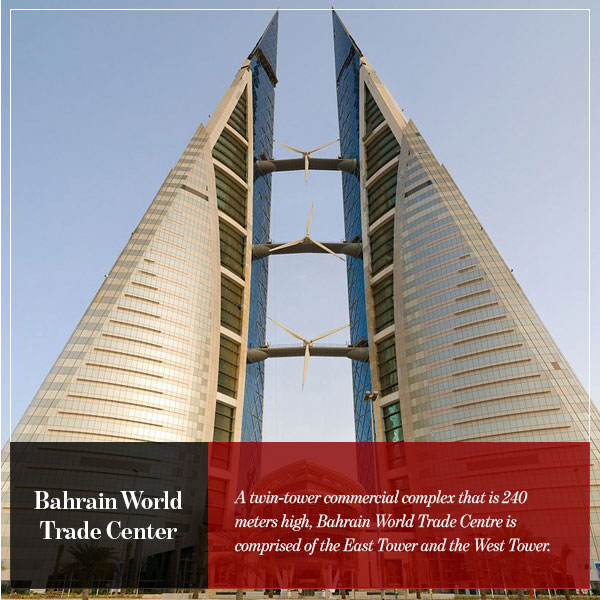 A twin-tower commercial complex that is 240 meters high, Bahrain World Trade Centre is comprised of the East Tower and the West Tower.

It is worth mentioning that the towers were the first in the kingdom to have wind turbines integrated into their design.

Bahrain World Trade Center is ranked as the second tallest tower in all of Bahrain. 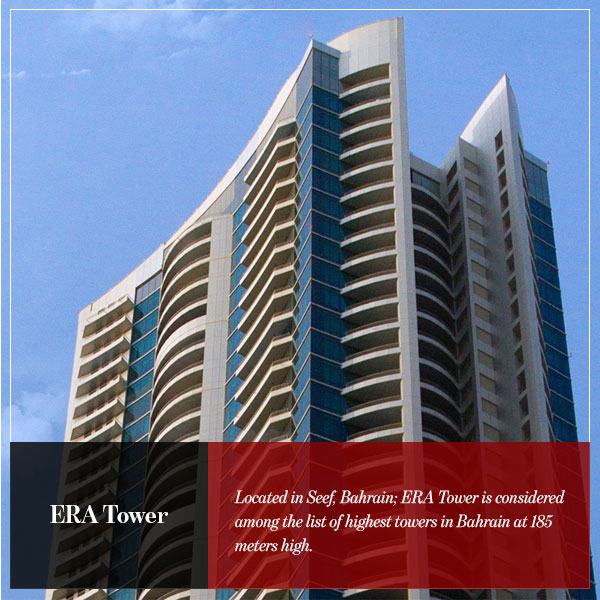 Located in Seef, Bahrain; ERA Tower is considered among the list of highest towers in Bahrain at 185 meters high.

The residential tower was officially completed in 2011.

Comprised of fully furnished luxurious apartments, the building features a wide array of facilities and amenities that promote luxury living.

From the common swimming pool, gym, sauna, spacious parking lot as well as integrated security systems and central air conditioning, ERA Tower is only minutes away from all the major attractions surrounding it. 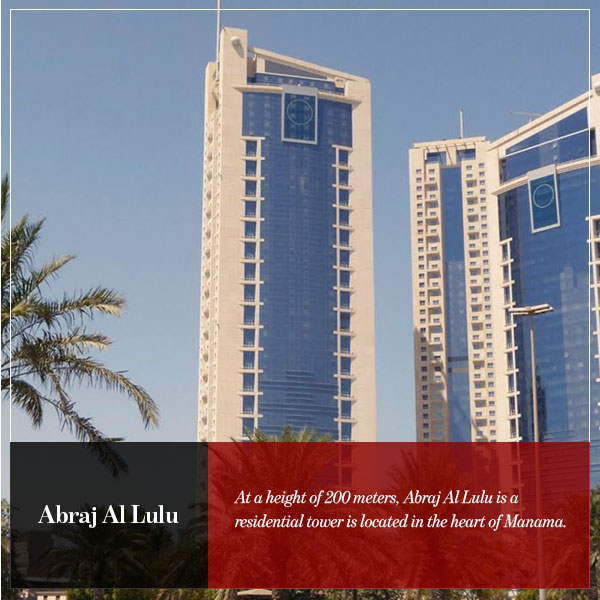 At a height of 200 meters, Abraj Al Lulu is a residential tower is located in the heart of Manama.

It is worth mentioning that the three towers are called Gold Pearl, Silver Pearl and Black Pearl.

The residential towers were completed in 2009.

The project includes over 860 high-end one, two and three bedroom apartments. You can rent a furnished two-bedroom apartment in Abraj Al Lulu for rates that start from 750 BHD. 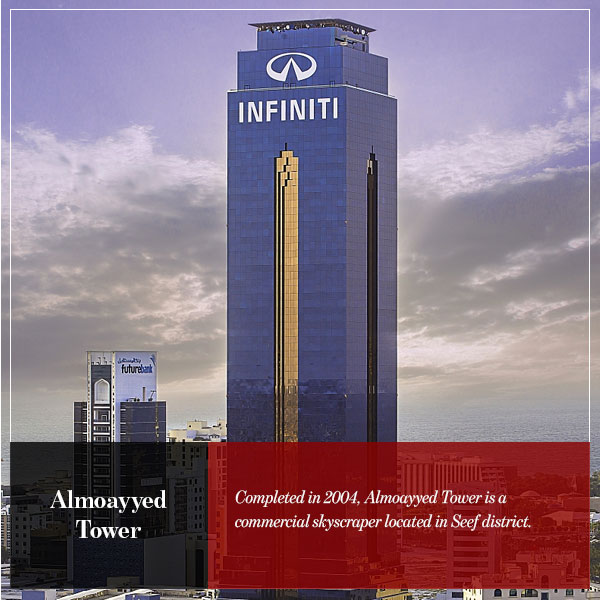 Completed in 2004, Almoayyed Tower is a commercial skyscraper located in Seef district.

At a height of 172 meters, Almoayyed Tower was considered to be the highest tower in Bahrain up till Bahrain World Trade Centre was constructed in 2008.

And even though Almoayyed Tower was no longer the highest building in Bahrain, but it was and still the first building in the kingdom to have a private helipad. 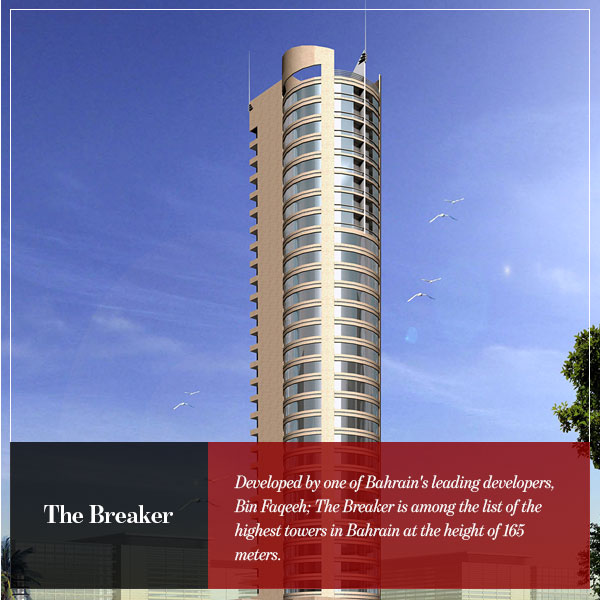 Developed by one of Bahrain’s leading developers, Bin Faqeeh; The Breaker is among the list of the highest towers in Bahrain at the height of 165 meters.

Located in Seef district, The Breaker is one of Bin Faqeeh’s deluxe projects.

The project is situated in a vital location where it is only a few steps away from Bahrain City Center and Seef Mall.

That’s not all as the building is also minutes away from all banks, schools and hospitals which make it a desirable place to live.

The 34-storey tower is comprised of one- and two-bedroom apartments as well as penthouses.

The project also features a wide array of facilities such as swimming pool, gym; kids play area and barbeque area. 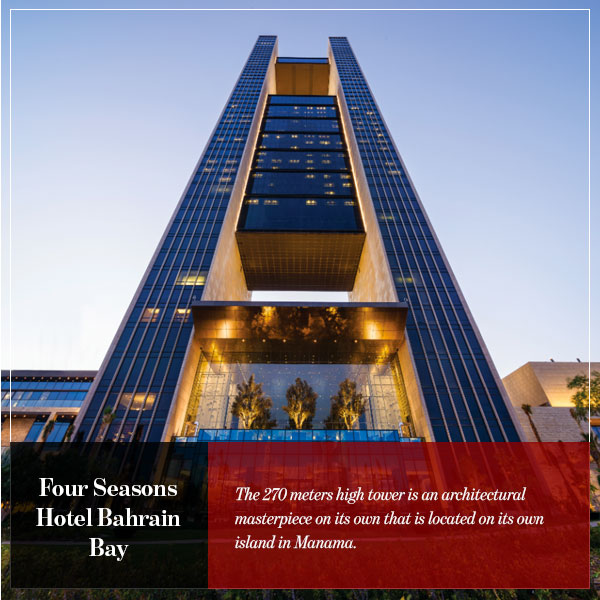 The 270 meters high tower is an architectural masterpiece on its own that is located on its own island in Manama.

The hotel was completed and officially opened its doors in 2015.

Comprised of 68 storeys, the hotel includes 273 fully furnished guest rooms that overlook either Manama’s breathtaking skyline or the Arabian Gulf.

With six different restaurants offering an eclectic selection of flavours, Four Seasons Hotel in Bahrain Bay is by far one of Bahrain’s most preferable luxury resort destinations.