Perceiving Bahrain as an exclusive touristic and residential area for youth is a big fallacy made by many foreigners and GCC citizens.

Bahrain is known of its various amenities and entertainment locations between malls, restaurants, cafes, especially those located in the pivotal areas in the heart of Manama like Seef and Juffair. This made it a good traction point for many GCC youth especially Saudi’s due to their proximity.

However, Bahrain has many features also qualifying it to be a magnificent touristic and residential center for families as well. Besides the traditional and historic locations to be seen like castles and mosques. Bahrain has beautiful coasts and natural protectorates which fit family tourism.

We chose the best five locations between all towns and districts featuring villas and apartments for rent in Bahrain. The 5 locations have some traits in common which we know you are looking for, besides, they all have various potential opportunities for residence and fruitful real estate investment.

One the calmest residential districts in the Kingdom, the main feature boasted by Busaiteen is its location in the heart of Manama as it’s attached to the mother island through Sheikh Isa bin Salman Causeway.

Busaiteen means gardens in Arabic, and it was given this name due to the big number of fields scattered around the area. The area lies northwest Muharraq Island near Bahrain International Airport, only a few minutes from it.

Busaiteen has a magnificent sea front, it also lies in the proximity of Bahrain’s top recreational and touristic venues like Amwaj and Dragon Mall.

Rental prices in Busaiteen start from BHD350 for a 2 bedroom semi furnished apartment, which is a very convenient price especially when compared with other upscale districts in Bahrain. 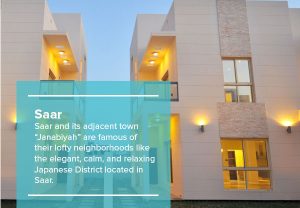 Located on the western side of Bahrain in the Northern Governorate, only 10 kilometers from Manama. It’s also close to King Fahd causeway linking between KSA and Bahrain.

Saar and its adjacent town “Janabiyah” are famous of their lofty neighborhoods like the elegant, calm, and relaxing Japanese District located in Saar.

The project Yasmeenat Saar comprises from 27 elegant villas and resembles a qualitative leap in the area’s real estate. You can find now a large pack of different apartments for rent in Saar. 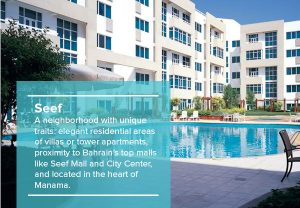 A neighborhood with unique traits: elegant residential areas of villas or tower apartments, proximity to Bahrain’s top malls like Seef Mall and City Center, and located in the heart of Manama.

Seef is bordered to the north by the wide coast of Arabian Gulf, also the Sheikh Khalifa Bin Salman Highway passes through the area to link it with the rest of Bahrain’s pivotal areas.

Seef has the most magnificent hotels like Fraiser Suites and Elite Garden Bahrain, in addition to numerous cinema halls and restaurants.

There are various kinds of residential units in the area. If you are searching for apartments for rent in Seef, villas, or penthouses, you ought to check the area’s fancy high-rise towers. 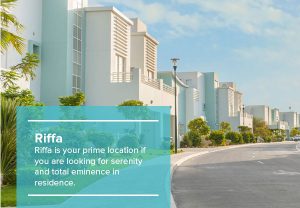 The main address of perfection and elegance in Bahrain. A real royal area as it embraces Bahrain Ruler Palace King Hamad Bin Isa Al Khalifa. The city is split into West and East Riffa, it is also known for Awali area which has a number of high-end closed residential compounds

Riffa is your prime location if you are looking for serenity and total eminence in residence. Riffa area is situated in a strategic location in the heart of Bahrain’s main island close to Hammad Town and Isa Town.

It includes a myriad of substantial facilities providing favorable styles of living such as mosques, schools, and retail markets. It sees also a number of new construction projects like Riffa Views project in Awali area South Riffa.

Hidd is located in the southern tip of Muharraq Island, the kingdom’s second largest island, where a wide-scale urban and real estate development has been witnessed during the latter period thanks to the government-backed sea reclamation works. Hidd now sprawls over 15 square kilometers.

The area is now seeing the construction of Hidd Heights by Bin Faqeeh Real Estate Investment Company, the project is expected to be full delivered by the end of 2018. It includes various residential units between studios, 1 bedroom, and 2 bedroom apartments scattered on 14 floors. It’s worth mentioning that apartments’ prices start from BHD 26900.

The area of Janabiya offers multiple perks to its residents; the district lies along the northern coast of Bahrain, it is near many fancy beaches that could be perfect getaways during weekends or even in the middle of the working days to unwind and enjoy the sea.

Janabiya is in a close proximity to King Fahd Causeway, which makes it ideal to expats or Saudis commuting to Saudi Arabia’s Eastern Region every day. It abounds with a wide set of lavish villas varying in size and location. Moreover, it has also fancy mid-rise apartments including various types of flats. The area has all needed facilities like schools, mosques, health centers, shopping destinations, in addition to fancy restaurants and cafes.

The most significant advantage featured in Gufool is its centric location. Gufool lies in the heart of Manama, it has a direct access to Budaiya street which links it to Manama downtown, Janabiya, and Budaiya. The district can be reached also from Salmaniyah, Um Al Hassam, and Segaya.

Gufool is a quiet and lofty residential district connected with a network of intertwining narrow streets. The majority of residential units available in the area are apartments found in fancy mid rise buildings. It has also several villas, but they are mostly occupied by Bahraini and Arab families. It’s a perfect destination for small families looking for an upscale residential location near their work in Manama. Gufool lies in a close proximity to many recreational venues like Bahrain City Center and Avenues Mall.