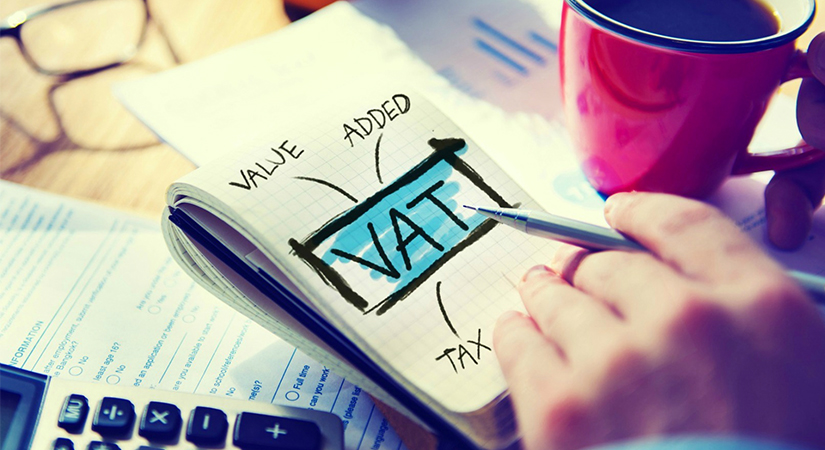 We can all safely agree that no one likes to pay taxes; even though it is often cited as one of the unchangeable facts of life, and despite its vital role in building up a well-functioning modern community – given the ruling political system is healthy, most of us are reluctant to do it. However, being obligated to pay a cut of your money is not the only reason people do not like taxes. Some studies and speculations have been suggesting that levying taxes can have negative side effects, like the VAT effect on a country’s inflation rate.

What is the Value-added Tax? 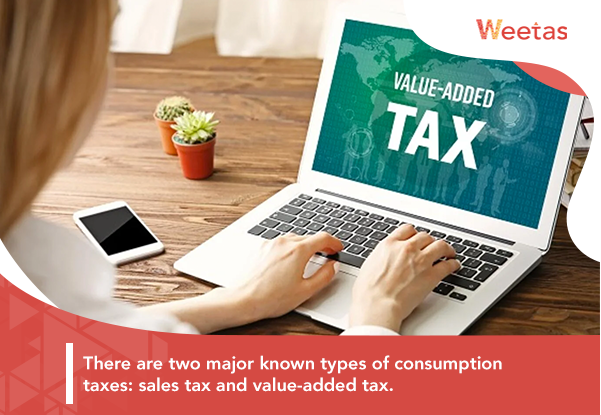 There are two major known types of consumption taxes: sales tax and value-added tax. As its name implies, sales tax is a directly imposed on the sale of a good or service to its final user or consumer.

On the other hand, the Value-Added Tax is an indirect tax; that is, it is levied individually on each level and point of producing and distributing the goods and services and thus calculated incrementally rather than being imposed only once on the end user.

The tax was designed to compensate for the public services and infrastructure utilized during the production and distribution of these goods and services. While the standard rate for the tax is 15%, several states have chosen to impose it with reduced rates; VAT has been imposed in Saudi Arabia, Bahrain and UAE at the rate of 5%.

The remaining GCC countries are expected to follow suit according to the Unified VAT Agreement they signed back in 2016 which obligates them to levy a 5% value-added tax.

What are the pros and cons of Value-added Tax?

Like the sales tax, the value-added tax has its own set of advantages and disadvantages:

1- Simplicity: VAT as a taxation system is easy to administer in comparison with the other indirect taxes.

2- Neutrality: Value-added tax is levied on all types of businesses. This helps close tax loopholes which the sales tax usually suffer from.

3- More revenues: It leads to the generation of more tax revenues at a low tax rate.

1- Regressive Nature: Value-added taxes, by nature, lead to an upsurge in the prices of goods and services. This increase impacts the poorer taxpayers the most as they spend a higher percentage of their income on purchasing the goods and services.

2- High Cost of Implementation: VAT uses a full billing system and it requires the documentation of all sales and purchases transactions.

3- Administrative Burden for Businesses: the price of the good or service which the company provides would change at every single point in production and distribution, which means that the tax would need to be calculated at each of these points. 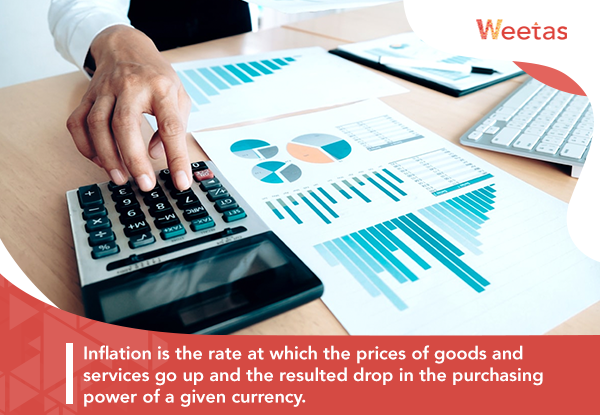 While it would certainly play a role, many economy experts affirmed that VAT, on its own, cannot push the inflation rate beyond its average threshold in a given country.

This is because, on one hand, VAT is not the only factor that determines the prices of goods and services, and also because the tax is never introduced on its own.

Government usually imposes a bundle of policies that helps diminish the normal VAT effect on inflation and, eventually, the purchasing power of the poorer classes. Such decisions include zero-rating some essential goods and services and excluding others from the tax.

In addition to that, VAT effect varies according to the businesses’ behavior; that is, when subjected to VAT, businesses might choose to:

B- To pass the tax partially, which would diminish the VAT effect on the final prices of goods and services and, therefore, the inflation rate.

C- To increase the prices of goods and services to even higher levels than what would be expected after the levying the value-added tax, which would cause an upsurge in the inflation rate.

So how much would VAT be responsible for accelerating the inflation rate?

To understand more about the nature of the cause-and-effect relation between VAT and the inflation rate, let’s take a look at a recent real life case. 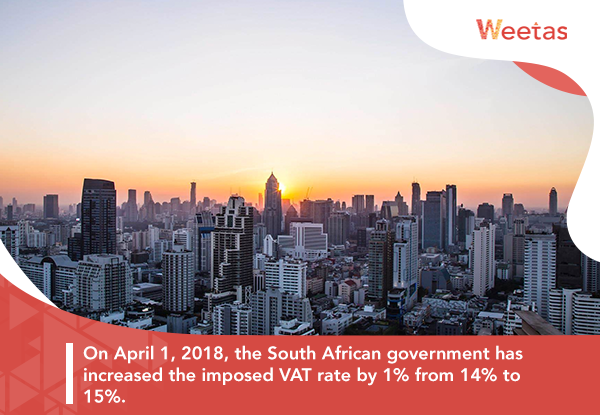 On April 1, 2018, the South African government has increased the imposed VAT rate by 1% from 14% to 15%. The VAT zero-rated list of goods and services in South Africa included some vital items like bread, oil, and sugar.

It is also worth mentioning that the South African Reserve Bank has set goal for itself to stick to an annual inflation rate range between 3% and 6%; that is, whenever the inflation rate would exceed the 6% mark, the Reserve Bank would increase the interest rate to counter the impact.

South Africa has successfully achieved this goal for years. In February 2008, two months prior to the announced increase, the annual inflation rate stood at 4%, which recorded the lowest inflation rate since January 2016.

Many economic experts have expressed their concerns regarding the impact this increase might have on the inflation rate and advised the South African government to take counter actions like increasing the interest rates.

What is the status quo one year later?

Studies have shown that other major factors were contributing to the current economic conditions in South Africa, including its recent recovery from one of the worst recorded droughts in history; the year 2015 was the driest recorded year since 1904.

This has negatively affect the agricultural production in South Africa, this impact was evident the most in the Maize production, which diminished by 45% in the year 2015/2016 in comparison with the year 2013/2014. The agriculture sector started to go back to its average production rates, which helped in decelerating the inflation rate.

Thus, and quite the contrary to the initial expectations and despite the upsurge of the prices of vegetables, meat, and dairy products – another side effect of the drought, the inflation rate has actually slowed down since April 2018. As a matter of fact, in June 2018, the prices of bread, sugar, and oil have dropped by 3.1% while the fruit prices dropped by 3.2% in comparison with the prices in June 2017.

In December 2018, the inflation rate slowed down to 4.5%, the mid-point of the aforementioned target range set by the South African Reserve Bank. One of the main drivers behind such deceleration is the crude oil prices’ downfall which occured in December 2018. As a result of that, the South African Reserve Bank has lowered its prediction for the inflation rate in 2019 from 5.5% to 4.8%. 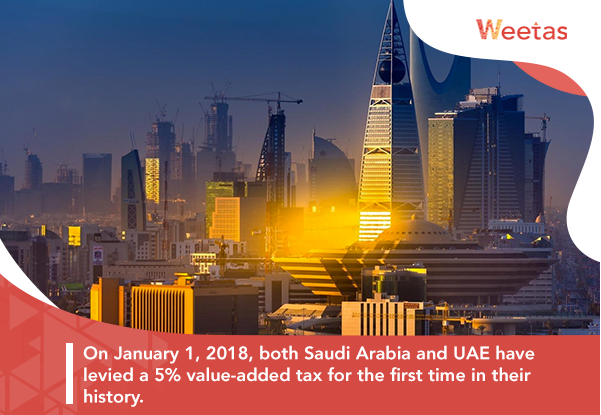 On January 1, 2018, both Saudi Arabia and UAE have levied a 5% value-added tax for the first time in their history. Safe for a few exemptions like public services and residential rentals, all goods and services were subject to the 5% VAT in Saudi Arabia.

Now, almost a year and a half later, reports concluded that VAT effect on Saudi Arabia’s inflation rate was insubstantial. The government has successfully generated revenues of $12.2bn from the indirect tax, making up more than the expat levy and excise taxes combined and constituting 1.6% of the kingdom’s GDP in 2018.

On the other hand, the last year witnessed generating the highest revenues from oil exports, the backbone of the Saudi economy, due to the increase the prices have gone through after the tax was levied, despite the downfall of crude oil prices in the last quarter of the year.

Even though the aforementioned downfall is expected to impact it negatively, Saudi capital expenditure is set to increase by 20% in 2019 to help reverse the pressure exerted by lowered oil prices on them. 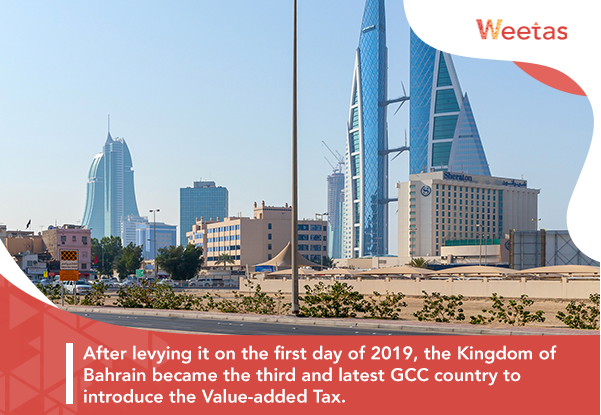 After levying it on the first day of 2019, the Kingdom of Bahrain became the third and latest GCC country to introduce the Value-added Tax.

While VAT is levied in Bahrain at the same rate at which it has been levied in Saudi Arabia and UAE, the case for the island kingdom bears a few differences in terms of the exempted and the zero-rated goods and services; such exemptions included the rentals and sales of Bahraini properties.

While we are not certain yet about the nature and radius of the VAT effect on the inflation rate in the Kingdom of Bahrain and on its business environment, previous examples do show that the effect of VAT on the inflation rates is certain-yet-restrainable if the government issued the right counter measures to diminish its negative impact on the poorer classes and their purchasing powers.