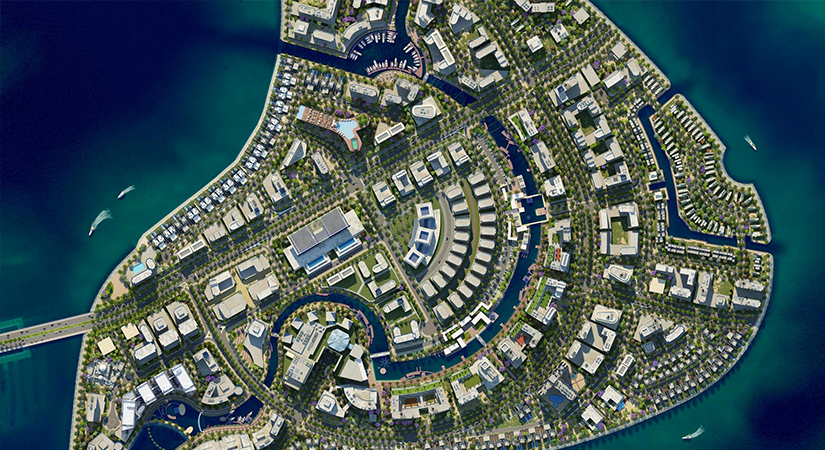 Inaugurated in April 2013, Dilmunia Island was envisioned to be mainly a major futuristic hub for wellness and healthcare. This mixed-use master development comes as a unique contribution at a time where Bahrain’s tourism is booming; tourism in Bahrain has been its fastest-growing economic section in 2017, while the Bahraini economy itself was the fastest growing economy in the Gulf Cooperation Council.

There are a lot of reasons and features that help distinguish the Kingdom of Bahrain, starting from its geographical natural as an island kingdom or its location in the heart of the Arab Gulf.  which overlooks some of the most vital trade routes in the world and which made her the capital of the old Dilmun civilization after which Dilmunia Island was named.

Located off the Northeastern coast of the island of Muharraq, Dilmunia Island enjoys a unique location in the proximity of some of the most vital destinations of Bahrain including Bahrain International Airport as well as King Fahad Causeway which connects the Kingdom of Bahrain to the Kingdom of Saudi Arabia.

The $1.6bn mega development spans the total area of 125 hectares of reclaimed lands, and it houses several projects including residential and commercial developments, hotels, retail spaces, waterways, as well as Dilmunia Health District which would be at the heart of the island. 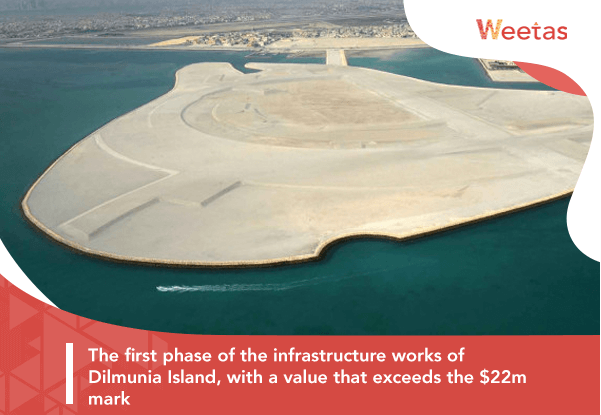 The first phase of the infrastructure works of Dilmunia Island, with a value that exceeds the $22m mark, has kicked off in March 2013; this came one month before the island project broke ground. 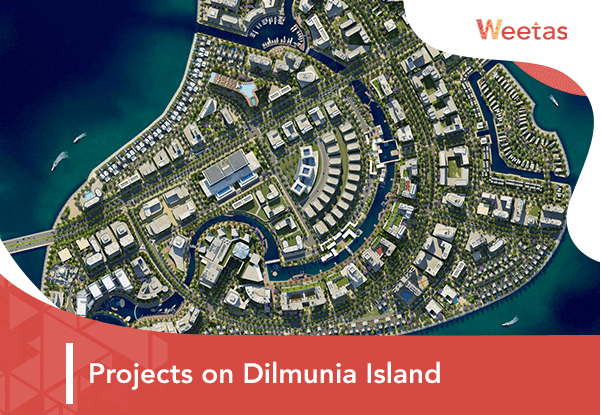 As we mentioned before, Dilmunia Island, as a mega-development, encompasses several projects of variant types. Here are the major projects we know of so far: 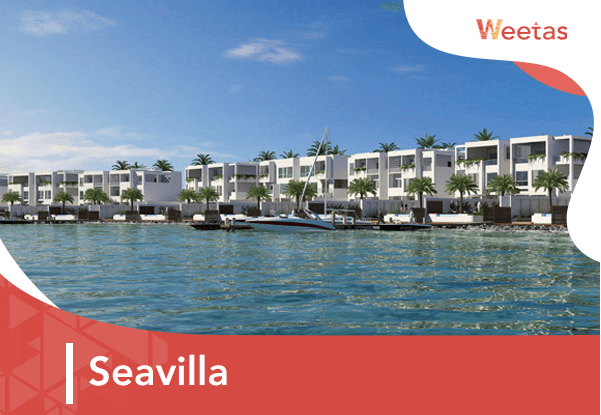 As the first residential project to be launched on the island, Seavilla maintained several outstanding features. The waterfront development spans a total area of 20,000 square meters with a coastline that extends for 500 meters.

The development comprises 32 villas, each consisting of 3 stories, offering mesmerizing views of the waters and green landscapes. Each house includes a suite-style master bedroom and an adjacent dressing room. The units were sold within days of launching its sales back in June 2013, reflecting the investment potential of both the project and Dilmunia Island as a whole. 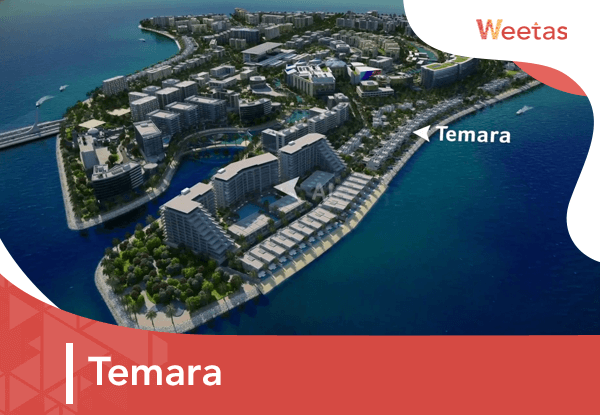 Temara includes 37 land plots – 22 seafronts and 15 coastal – of various areas ranging between 596 and 1,488 square meters that are each 15  meters wide at least. The project can be accessed through multiple means: either by the sea using jetters or via the two roads that connect it to the rest of the island. 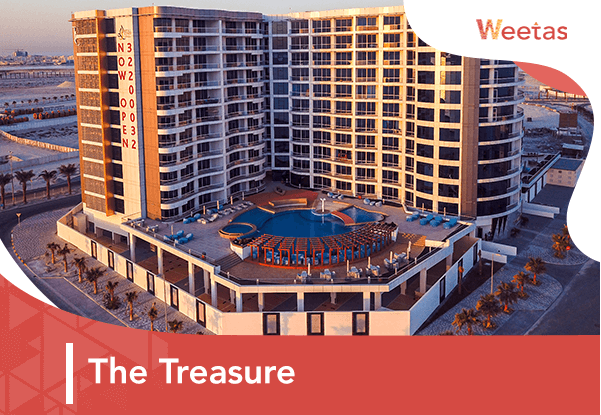 Developed by Bin Faqeeh Real Estate Investment Company, one of the leading real estate developers in the Kingdom of Bahrain, the Treasure is the first residential building to be developed in Dilmunia Island.

The tower comprises residential units of different specifications including one-, two-, and three-bedroom apartments as well as penthouses. In addition to that, the Treasure features a number of high-end amenities including an outdoor swimming pool, fun area, health club, and private cinema. 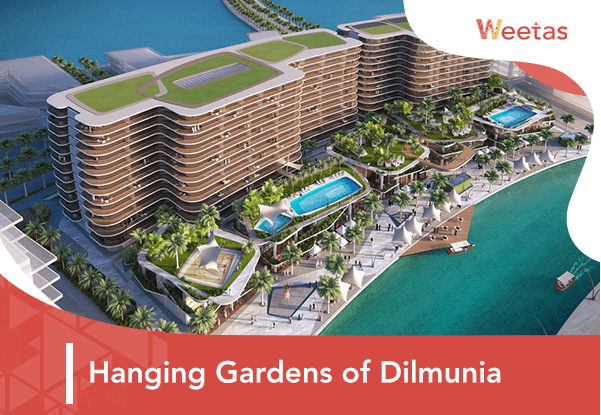 Developed by Ahmed Al Qaed Group and named after one of the ancient world’s famous wonders, the Hanging Gardens of Dilmunia was envisioned to celebrate the Hanging Gardens of Babylon by bringing back its concept and combining it with mesmerizing contemporary architecture and upscale waterfront residential options.

The terraced gardens built on the podium on the top of the tower provide the residences with stunning views and, combined with the other high-end amenities of the building, an exquisite and luxurious lifestyle not found anywhere else. 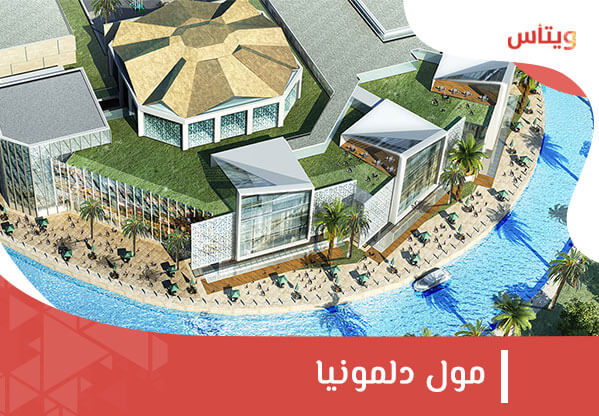 As the main retail attraction on Dilmunia Island, Mall of Dilmunia is situated in a unique location that overlooks Dilmunia Grand Canal. The destination was conceived to be the perfect shopping and entertainment destination for all the family members.

The mall houses a Boulevard that was designed to provide its visitors with the sensation that they are walking the streets of a European city, comprising outlets for the best world-class and lifestyle brands. On the building’s rooftop, visitors can also have a taste of the delicious food and beverages from the restaurants and coffee shops there.

As for what it provides for entertainment seekers, the mall encompasses two atriums built to accommodate large-scale events, a cylindrical aquarium with a height equivalent to that of a 3-story building, and an Ice Rink on its first floor.

The Outstanding Features of Dilmunia Island: 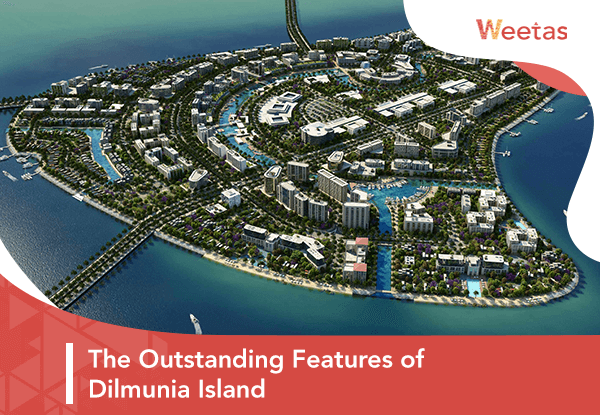 In addition to the residential and commercial developments that it comprises, Dilmunia has two distinct components that were the main drive behind boosting it as a tourist and investment destination: 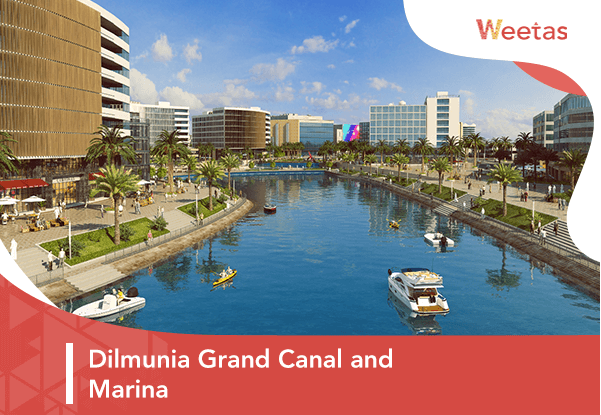 Planned to run through the entire length of the manmade island, Dilmunia Grand Canal will span 1.7 kilometers while its width would vary between 15 meters at some points and 35 meters at other points. Throughout its length, the canal will be promoting some breath-taking views and tranquil experience through the promenades, fountains and water walls which it would comprise.

It is worth mentioning that the foundation and soil preparation works for Dilmunia Grand Canal and Marina have been completed in April 2019; a month later, the construction works of the canal have begun. 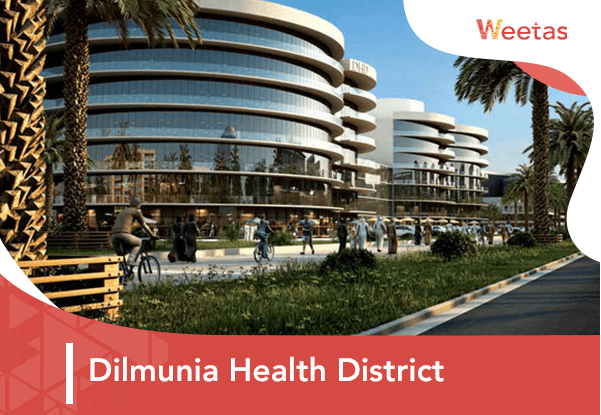 The district is set to be one of the leading wellness tourism destinations in the region through providing preventive, curative, rehabilitative medical care services covering a wide range of medical specialties as well as alternative treatment programs through the utilization of the state-of-the-art medical equipment, latest technology advanced, and high-caliber professional medical staff.

The services provided in this grand healthcare center will include: 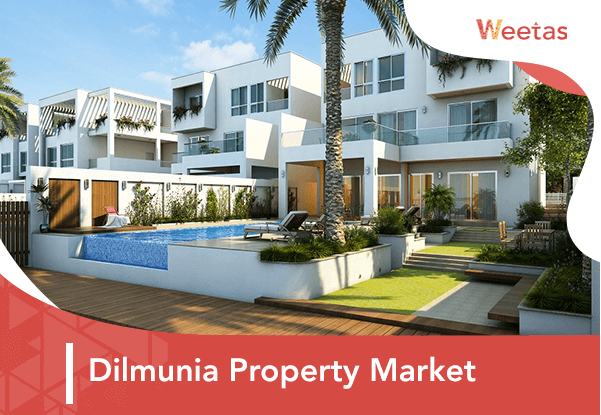 As you might have guessed already, the property market in Dilmunia Island is one of the most expensive in Bahrain.

If you are looking for a flat to buy in Dilmunia Island, you can find a one-bedroom apartment there for prices that start from around 50,000BD; as for bigger spaces, buying a two-bedroom flat in Dilmunia can cost you an average of 100,000BD.