The field of real estate of all its sectors either construction, contracting, or real estate investment, is like a launchpad for many Arabian magnates who are now leading business and finance in Arab countries. Several Arab tycoons made it to success through real estate sector by accruing huge financial investments from its work. There’s nothing surprising about that since real estate is a promising market in the Middle East region and it has been booming in the last couple of years.

We will lay down here 5 success stories for successful Arab businessmen who were able to take advantage of this boom in real estate sector to occupy positions between the region’s most significant figures. 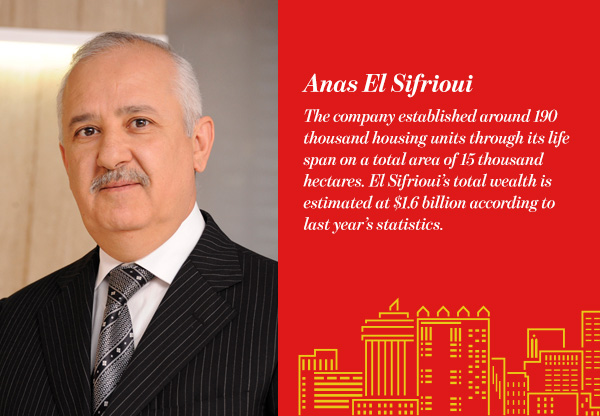 Before displaying the story of the Moroccan business tycoon, we have to explain the meaning of the term “ghassoul” which is mainly related to his tale.

Ghassoul is a natural mineral clay popular in Morocco and its principally used in treating and protecting hair and skin.

El Sifrioui started his business life with selling ghassoul. During his childhood, he had to leave school to assist his father in managing his ghassoul mines.

The young trader succeeded in promoting his father’s product inside and outside Morocco, which encouraged him to carry on in business field. He established after that a paper company and a factory producing calcium carbonate.

The main shift that enabled El Sifrioui from reaching his current status was in 1995 when his real estate company “Doha”, which he established 1998, won a construction contract for developing 20 thousand residential units subsided by the Moroccan government.

Doha expanded thereafter to become a large-scale conglomerate including under its umbrella many companies engaged in different business sectors like financial services, cement production, tourism, and other domains.

The company established around 190 thousand housing units through its life span on a total area of 15 thousand hectares. El Sifrioui’s total wealth is estimated at $1.6 billion according to last year’s statistics. 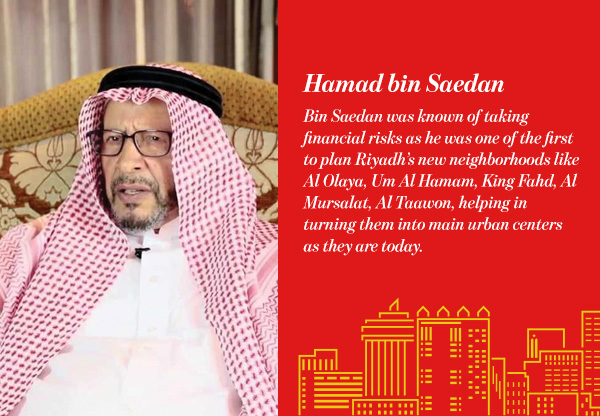 For sure the young Hamad bin Saedan had no idea that the small house he bought from his small savings would represent a key turning point in his life making him one of the most prominent investors and developers in the real estate sector in Saudi Arabia.

Hamad has finally been able to buy an independent house for himself instead of the small room in his father’s house. However, he sold the house to exploit its value in starting a real estate business under the name “Badr Commercial Corporation”.

With his corporation partners, Bin Saedan was able to execute many commercial deals. He used to trade in properties and lands by buying large plots then selling them back after dividing them into smaller lots.

Bin Saedan was known of taking financial risks as he was one of the first to plan Riyadh’s new neighborhoods like Al Olaya, Um Al Hamam, King Fahd, Al Mursalat, Al Taawon, helping in turning them into main urban centers as they are today. 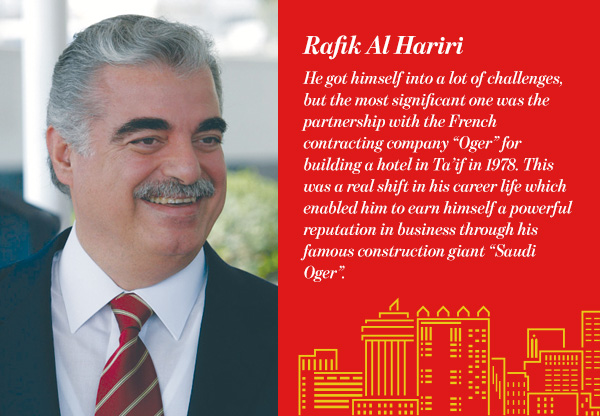 Whenever his name is mentioned, it brings up respect and good remembrance from all Lebanese, even all Arabs.

Maybe it’s the man’s self-dependence that gained him this reputation. Al Hariri started his career as an auditor in Lebanon, then moved to Saudi Arabia to work as a teacher, until he established his own private contracting firm under the name “Ciconest” in 1970.

Or it could be the adventurous tenure he enjoyed during his life as a businessman and politician. He got himself into a lot of challenges, but the most significant one was the partnership with the French contracting company “Oger” for building a hotel in Ta’if in 1978. This was a real shift in his career life which enabled him to earn himself a powerful reputation in business through his famous construction giant “Saudi Oger”.

Al Hariri received the Saudi nationality in 1978, he was appointed the prime minister of Lebanon for two periods, the first was from 1992 to 1998 which concluded by the end of his period.

The second time was from 2000 to 2004 and it ended after his resignation following a series of misunderstandings with the Lebanese president at that time Emile Lahoud. 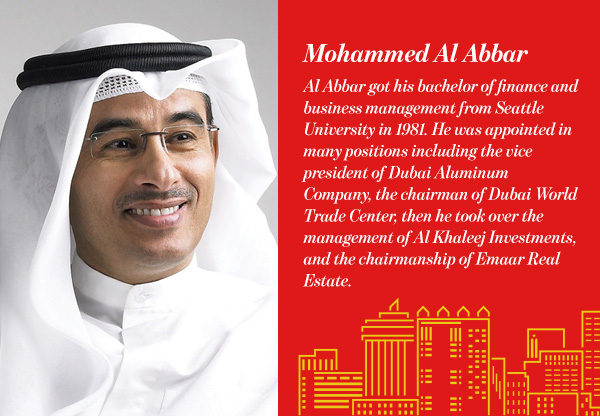 An Emirati businessman born in Dubai and played a pivotal role in developing the city’s economic and urban reality to become one of the leading investment hubs in the world.

Al Abbar got his bachelor of finance and business management from Seattle University in 1981. He was appointed in many positions including the vice president of Dubai Aluminum Company, the chairman of Dubai World Trade Center, then he took over the management of Al Khaleej Investments, and the chairmanship of Emaar Real Estate.

In the real estate sector, Al Abbar was successful during his term as a director of Emaar Real Estate in launching a series of gigantic projects that contributed in bolstering Dubai’s current rank.

Emaar has investments in 16 countries including UAE, KSA, Egypt, India, Jordan, and many other.

According to his statement, the project of King Abdullah Economic City, which is undertaken by Emaar, is the company’s biggest venture now and it’s expected to be totally delivered by 2035. 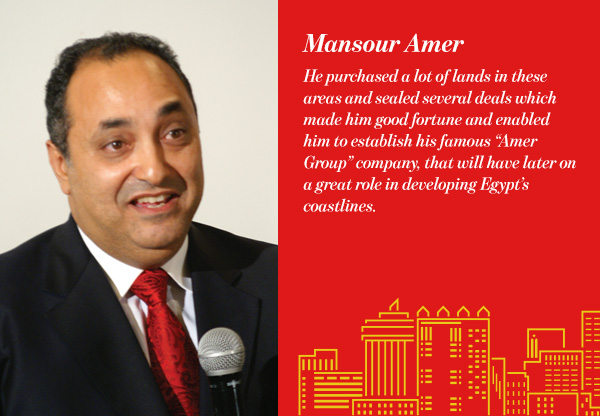 The Egyptian self-made tycoon who left nothing to chance. Amer knocked all doors and trekked all routes to reach power and success.

He started as a prosecutor, but the ordinary career ladder of law in Egypt didn’t appeal to him, simply it wasn’t up to his ambition, so he chose to quit his job and go for self-employment.

He worked with his father in his law firm and partnered up with him to start a small brick production business, but this also wasn’t up to his ambitions.

He snatched the first opportunity to come across his way, it was a building construction project in Cairo’s lofty district of Heliopolis. The project made a lot of success which encouraged him to establish more buildings in the same area.

The real estate boom in Egypt at that time, especially in tourism and hospitality sectors, emboldened him to focus his investments on Egypt’s sea-side touristic resorts like Sharm El Sheikh and Al Ain Al Sokhna.

He purchased a lot of lands in these areas and sealed several deals which made him good fortune and enabled him to establish his famous “Amer Group” company, that will have later on a great role in developing Egypt’s coastlines.

Investing in the real estate sector wasn’t the only matter to occupy Amer’s mind, he was driven by his ambition also to get engaged in other fields like politics.

Amer nominated himself to join the Egyptian parliament in 1995. He lost in elections, but tried once more in 2000 and won this time after joining the ranks of the ruling National Democratic Party of Egypt.