Trump Hotels in the Middle East: Trials and Tribulations

While his foreign policies have been a polarizing topic among his supporters and opposing figures and parties alike, especially against Mexico and the Islamic World, it is no secret that there have been previous attempts to launch multiple Trump hotels in the Middle East and the Arabian Gulf – a market he is still seeking a share in, as far as we can tell, despite his statements which might imply otherwise.

Considered by the majority of the American people – as well as most of the world – as the most controversial president to ever step into the White House, Donald Trump might have not many political endeavors in his history to tell, but he surely has always been a public figure whose name became a brand that is synonymous with richness and real estate.

As a matter of fact, Trump is the wealthiest American president up to date and the first one among 45 presidents who took hold of the Oval Office to be without previous military or government service experience. It is also safe to say that his decisions and policies could always trigger discontent even among the members of the Republican Party.

We here demonstrate the American president’s most famous business ties and attempts to build Trump hotels in the Middle East region so far: 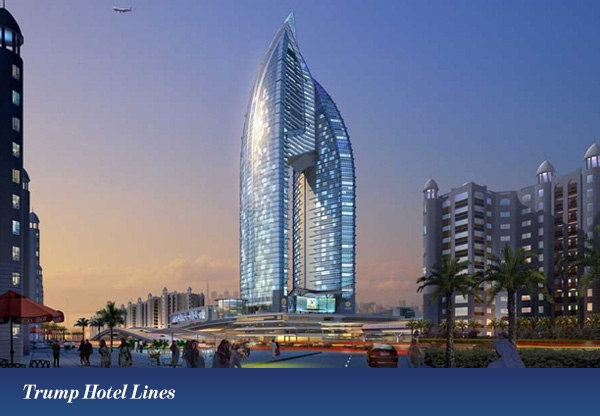 Over the last two decades, Trump has been reinforcing the business relationships of the international billions of dollars’ worth Trump Organization with his counterparts of real estate tycoons in the Arabian Gulf and the royal families who rule the region.

In an interview held two years ago before Donald Trump was inaugurated as the president of the United States, Ivanka Trump, the business magnate’s daughter and the then-executive vice president of development and acquisitions of the Trump Organization, stated that the Trump Hotel Collection has been eying opportunities in the big cities of the Arabian Gulf, specifically the United Arab Emirates, the Kingdom of Saudi Arabia and Qatar. The main focus of Trump Hotels in the Middle East, Ivanka Trump added, is Dubai.

This did not come as a surprise. The UAE is considered the biggest major business and investment attraction in the Arabian Gulf in the present time, Trump has been persuading several business partnership opportunities with its royal family for a bit more than a decade now. In 2005, Trump landed a deal with Nakheel, the real estate development company behind Palm Jumeirah that has close ties to the royal family of the UAE, to build The Palm Trump International Hotel and Tower.

However, the deal to develop The Palm Trump International Hotel and Tower was canceled in 2008 because of the involvement of two executives from Nakheel in a corruption probe. 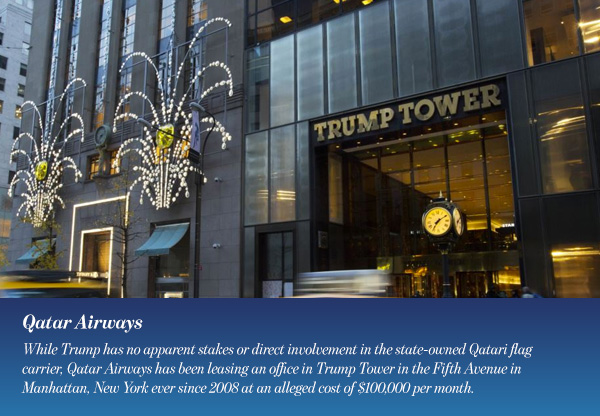 While Trump has no apparent stakes or direct involvement in the state-owned Qatari flag carrier, Qatar Airways has been leasing an office in Trump Tower on Fifth Avenue in Manhattan, New York ever since 2008 at an alleged cost of $100,000 per month. 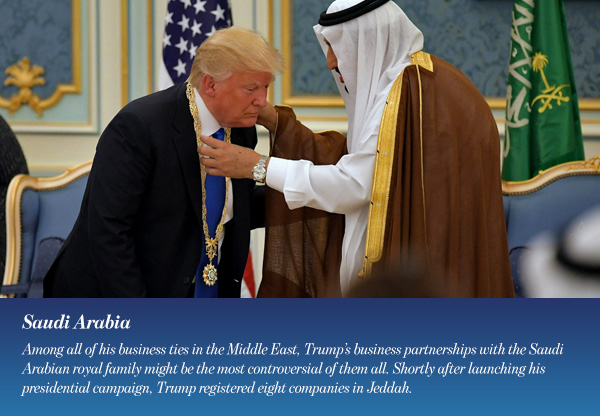 Among all of his business ties in the Middle East, Trump’s business partnerships with the Saudi Arabian royal family might be the most controversial of them all. Shortly after launching his presidential campaign, Trump registered eight companies in Jeddah. However, this was not the start of the American President’s business relationship with the Kingdom of Saudi Arabia.

Although there are no Trump Hotels in Saudi Arabia so far, Trump has had previous encounters with the Saudi rulers. Back in the late eighties, Donald Trump was struggling with his casinos in Atlantic City when Alwaleed Bin Talal, the Saudi Arabian royal prince who is considered one of the most influential business figures and royal figures in the region, agreed to buy one of his famous yachts. Trump used the money to resolve the crisis.

This was not the only business encounter between the two billionaires. In the nineties, Donald Trump was on the verge of declaring bankruptcy after facing a financial crisis due to unpaid overdue loans he took from several banks before he was helped out of it by Alwaleed Bin Talal who bought out Trump’s remaining shares in Plaza Hotel in New York City.

This has been brought up again by Bin Talal in one of his tweets in the aftermath of one of Trump’s most controversial statements that accused Saudi Arabia directly of the September 11 attacks. In his response, the billionaire prince backfired at Donald Trump, reminding him of how he “bailed him out twice” before. 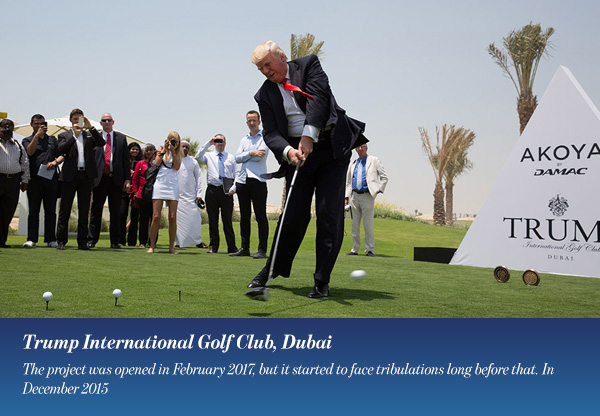 By far, this is the biggest business venture Donald Trump could successfully launch in the Arabian Gulf. In 2013.

Damac Properties, one of the biggest real estate conglomerates in the UAE that is owned by business magnate Hussein Sajwani who is often nicknamed “the Donald Trump of the Middle East” due to his posture as one of the most famous real estate businessmen in GCC, has announced a new partnership with the Trump Organization to develop the first Trump Hotel in UAE and all of the Middle East, Trump International Golf Club in Dubai.

The project was opened in February 2017, but it started to face tribulations long before that. In December 2015, following the comments the then-president-elect Trump made suggesting a Muslim Ban, Damac removed Trump’s image and name from the billboard advertisements in response to the call of a local group for a boycott of the Trump brand. Damac, however, reinstated the American president’s name and photo two days later.

The project comprises 100 luxury villas, an 18-hole golf course, a golf academy and a clubhouse that is spanning more than 30,000 square foot among other luxurious amenities.

This is not the last project of its kind in Dubai for Donald Trump as Damac Properties is currently building Trump World Golf Club, Dubai which has been designed by prominent golfer Tiger Woods and is set to open in 2018.

It is clear that Donald Trump’s business ties to the Middle East, controversial as they might be, are far from being cut loose or ended. Quite the contrary, they seemed to be strengthened even more by the power which his new position as the president of the US imposes. Thus, it is safe to say that we have not seen the last of Trump Hotels in the Middle East or the American President’s business endeavors in the region yet.