What puts the yum yum in the Kingdom: Traditional food in Saudi Arabia

The Kingdom of Saudi Arabia has got a rich past immersed in culture and tradition. Saudi people are always proud of their heritage, and even more proud and generous when it comes to sharing this heritage with people from other nations. Traditional food in Saudi Arabia is one of the most generously shared aspects of their heritage.

Traditional Saudi food includes a lot of meat, basmati rice, flatbread, and fermented goat milk, this is probably due to a long history of herding sheep and goats, as well as a lack of rich fertile soil suitable for farming.

Saudis are still fond of their traditional food, as they should be. Traditional Saudi food is delicious and rich in flavor.

So let’s take a look at the most renowned and the hidden gems of traditional food in Saudi Arabia.

The most famous of all Traditional food in Saudi Arabia: Kabsa 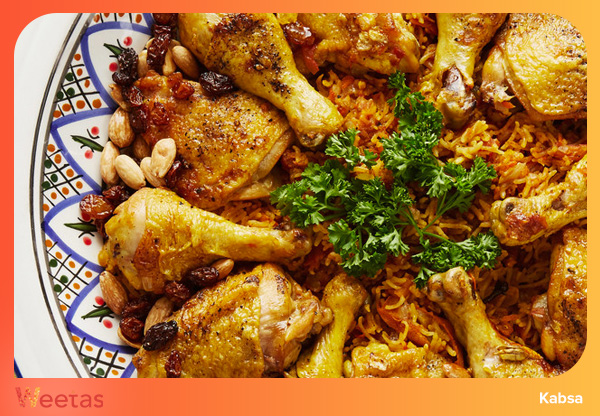 Of course, we cannot talk about traditional Saudi food without Kabsa being on top of the list!

Kabsa is the most renowned traditional food in Saudi Arabia. Served in many countries across the world, it is one of the most globally celebrated traditional dishes.

Kabsa is usually made with basmati rice, meat, vegetables, and a mixture of spices. One can say that the most important ingredient in the Kabsa is the mixture of spices; they are after all responsible for the dish’s distinctive taste. The spices used in the traditional kabsa are usually black pepper, cloves, cardamom, saffron, cinnamon, black lime, bay leaves, and nutmeg.

Almost all kinds of meat can be used in making this traditional Saudi dish; it can be made with chicken, goat, lamb, camel, beef, fish, or shrimp.

You can now even purchase some Pre-mixed kabsa spices and cook your own Kabsa at home. They definitely reduce preparation time, but may not taste exactly the same. 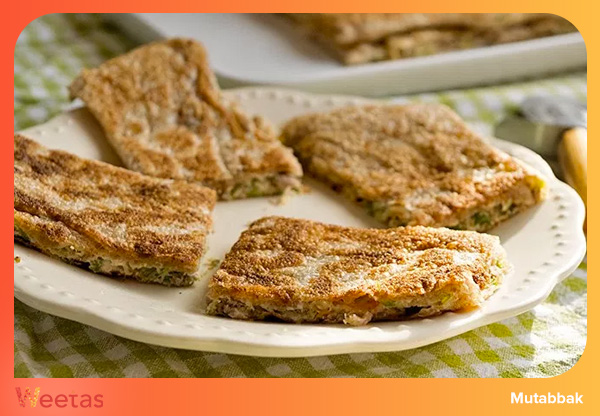 The traditional Saudi Mutabbak is made of stuffed pan-fried bread. It is commonly found in the Hejaz regions. The name mutabbaq means folded in Arabic.

This traditional food in Saudi Arabia can also be found in, Yemen, India, Indonesia, Malaysia, Singapore, Brunei, and Thailand. Depending on the location, the name varies slightly and the ingredients can significantly vary.

The dough and the stuffing may differ from place to place, but the concept is the same. Flatbread, stuffed with meat or vegetables along with spices and egg mixture, then fried, folded, and cut into single servings. 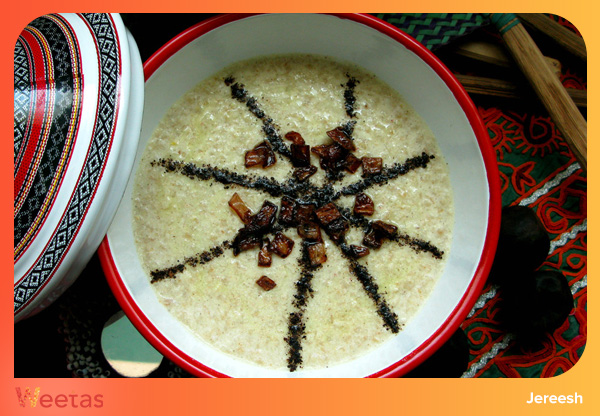 Jereesh or Harees is one of the oldest recipes among traditional food in Saudi Arabia. People have been eating Jereesh for hundreds of years.

This traditional Saudi food is made with boiled crushed or coarsely-ground wheat, rice, onion, spices in addition to meat and broth. This might seem like an unusual combination for you but it’s absolutely heavenly.

The consistency of this traditional dish varies between porridge and dumpling. It is especially popular during the month of Ramadan. 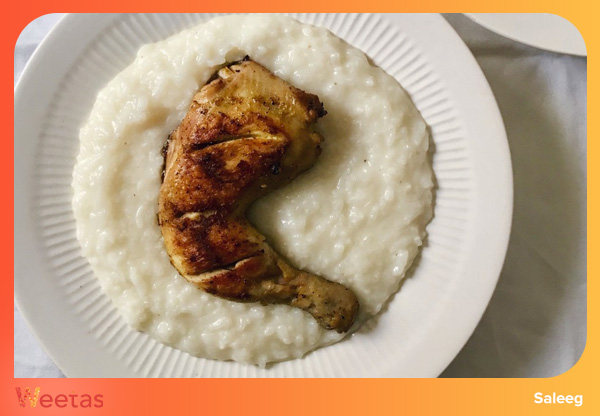 Saleeg is a traditional dish in Saudi Arabia that is made with white-rice cooked in broth and milk. Some people say it bears resemblance to Italian risotto.

Saleeg is particularly popular in the Hijaz region. It is rich in taste as well as nutritional value, and kids always love it.

Saleeg is a warming winter dish in Saudi Arabia, it can be made with either chicken or meat, and it is usually served with duggus, which is a chili tomato sauce, and pickled lemons. 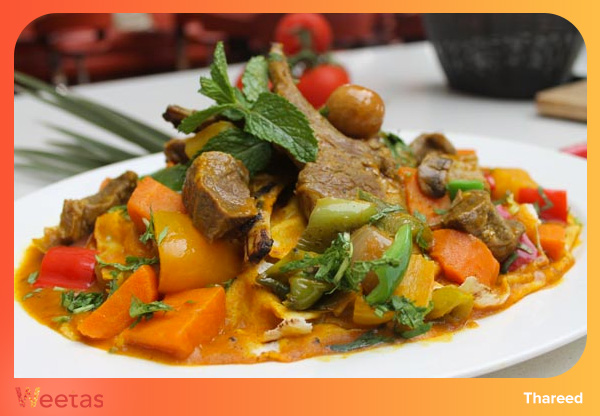 Bread, broth, meat, vegetables, and spices, no wonder Thareed is one of the most popular traditional dishes in Saudi Arabia.

This heartwarming meal can be consumed alone or with a side of rice, it is usually a staple on the Saudi table during the month of Ramadan. 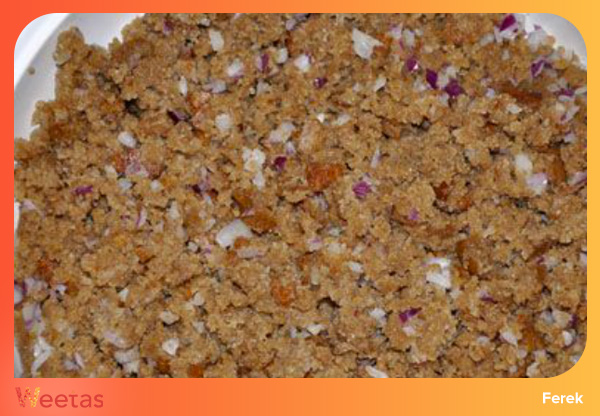 The traditional winter comfort food in Saudi Arabia, Ferek is a brown paste made with caramelized onions.

Ferek is usually made with caramelized onion mixed with powdered sugar, spices, and ground bread or baked dough. It is sweet, savory, and warming all at once.

People are sometimes reluctant to try Ferek when they hear about it, a dessert based on onion paste?! They say, but once they do try it, they cannot stop! 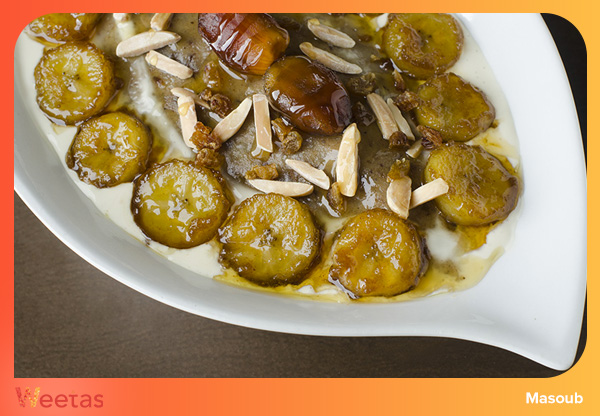 The dish is popular for a reason, not only is it delicious, but it is also very easy to make!

You just mix some overripe bananas with some ground flatbread, top with honey and nuts, ta-da your breakfast is served! 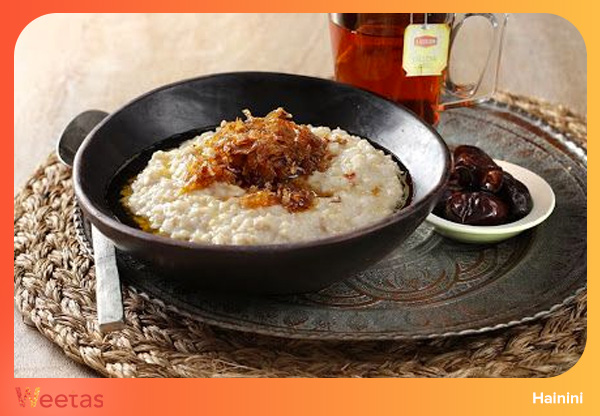 For years and years, Arabs have been known to end their meals with dates, and in a country famous for its abundance of date palms that certainly applied.

That is why traditional food in Saudi Arabia does not include a lot of dessert options other than dates, and dates stuffed with nuts. And of course, the Hainini dessert which is made of dates!

This traditional Saudi dessert is made of date, flour, and butter, it is spiced with Cardamom and Saffron and it tastes like absolute bliss!

Soft, sugary, warm, and with distinctive Arabian spices, this dessert is the epitome of Arab hospitality. Hainini is usually served with traditional Arabic coffee, especially in the month of Ramada.

Saweeq
It is a famous food among the people of the Hejaz in the Kingdom of Saudi Arabia and has more than one other name such as “Bedouin Chocolate”. Its original name is “Khawada” as it is famous and loved by many, and some add to it other additions such as chocolate for the Bedouins, which is It consists of flour before it is cooked, i.e. it is barley, and it is milled and added to Baladi ghee or butter and watered with dates as it is one of the most delicious foods that can be dipped in dates, and it is a dish that has been developed now by dipping dates in chocolate.

Henez
Henez is one of the most famous Saudi food, which has spread throughout the Arabian Gulf and has some special rituals in its preparation. Asir Governorate in the Kingdom of Saudi Arabia is famous for it, and goats are cooked for them in a pit covered with dirt over a fiery flame.

Kanaad
It is a type of fish close to tuna and cooked in an easy way, cut into slices, then fried in oil and served with salad and rice.

Hasawy rice
It is rice grown in the city of Al-Ahsa, for this reason, it is named after that and is cooked with spices, spices, and nuts and has a brownish color

For more about food in KSA see also:

Dine in The Bride of the Red Sea: The best restaurants in Jeddah 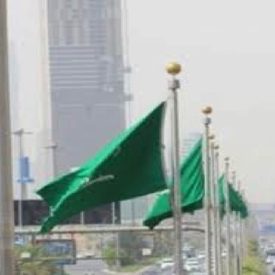