Unusual Architecture: The Most Unique Houses in The World

Through the ages people have lived in all sorts of living quarters and unique houses, starting from caves in the caveman era and all the way into space capsules in the space era.

Some people such as astronauts for example are forced to live in these weird living dwellings, while others just value uniqueness, unique houses for them are a luxury.

Here are some of the most unique houses around the world, would you like to live in such a house? 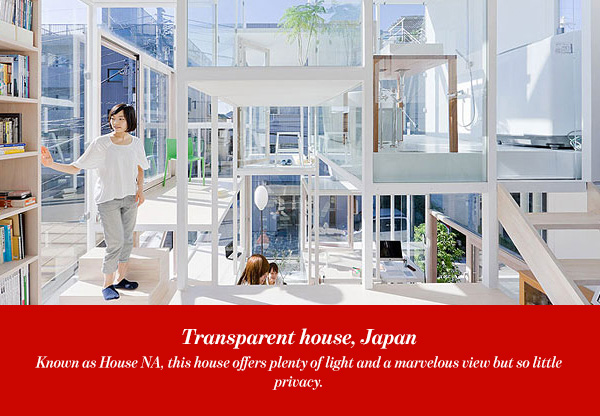 Known as House NA, this house offers plenty of light and a marvelous view but so little privacy.

The unique house is 914 square foot, it was built by Sou Fujimoto Architects.

The house is supposed to resemble the concept of living in a tree, nonetheless, the white steel frame structure bears no resemblance to a tree.

As the house’s name suggests, all the walls in this transparent glass house are made of glass. 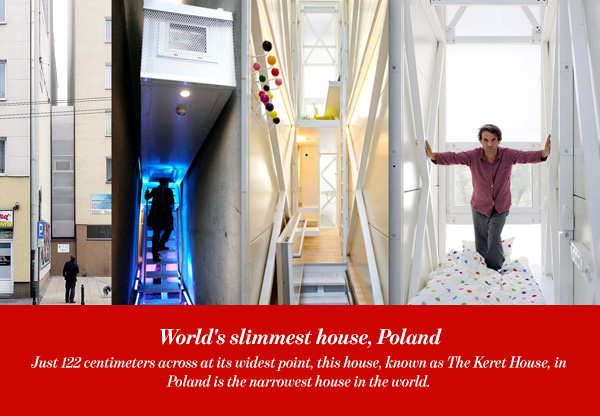 Just 122 centimeters across at its widest point, this house, known as The Keret House, in Poland is the narrowest house in the world.

At its narrowest point the house is no more than 72 centimeters wide.

It was designed by Polish architect Jakub Szczesny. This unusual house is squeezed into a crevice between two buildings in Warsaw.

The house provides a temporary accommodation for traveling writers. 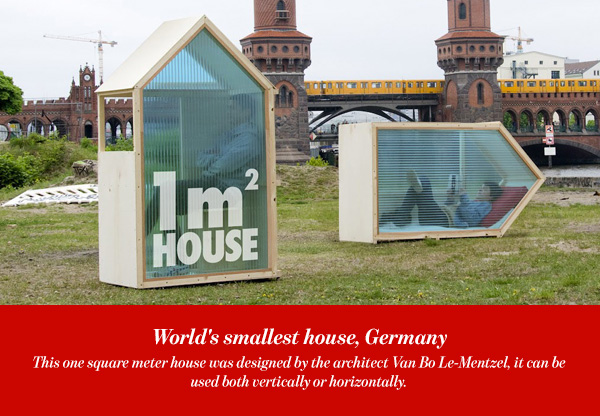 This one square meter house was designed by the architect Van Bo Le-Mentzel, it can be used both vertically or horizontally. It weighs only 40 kilos and has wheels, so it can be moved around easily.

This unusual house is probably the smallest house in the world. It is a wooden structure that you can assemble yourself.

The house uses only one square meter of space and can be used as a dwelling place or even an extra room inside your apartment. 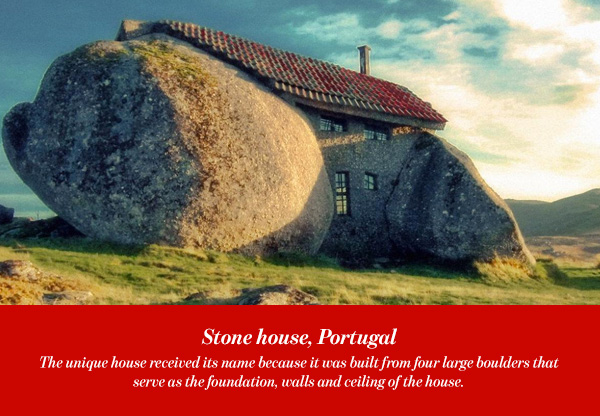 This house is known as Casa do Penedo which means: House of the Rock.

The unique house received its name because it was built from four large boulders that serve as the foundation, walls and ceiling of the house.

The residence was initially used by the owners as a private holiday destination.

But now it is a small museum of relics and photographs from Penedo’s history. 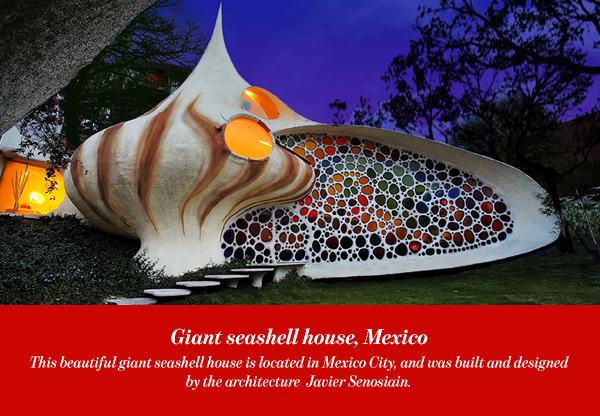 This beautiful giant seashell house is located in Mexico City, and was built and designed by the architecture  Javier Senosiain.

The unique home features a giant wall of colored mosaics which lights up the living space in a stunning rainbow effect. 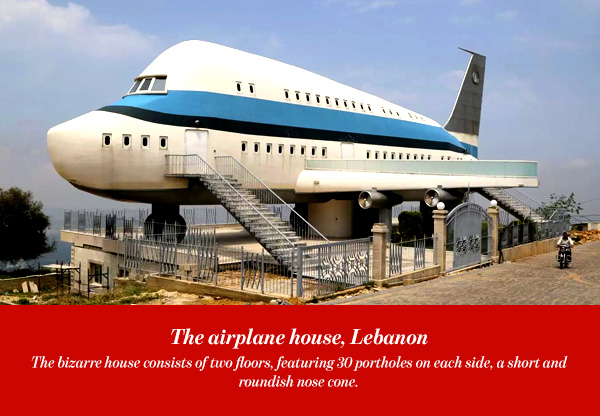 In the village of Miziara, Lebanon, lies this airplane house that resembles an Airbus A380.

The bizarre house consists of two floors, featuring 30 portholes on each side, a short and roundish nose cone. 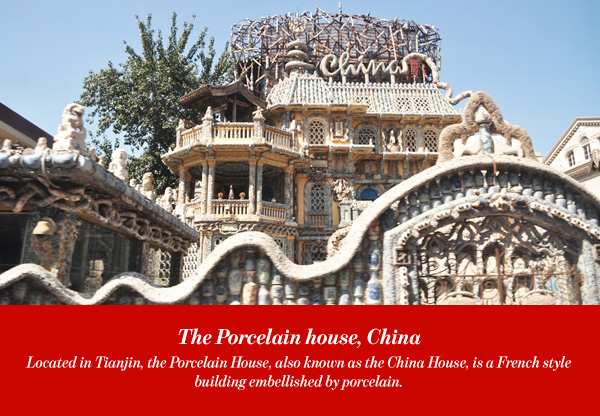 Located in Tianjin, the Porcelain House, also known as the China House, is a French style building embellished by porcelain.

The windows, doors, pillars, eaves and roofs are all exquisitely decorated with different chinaware, colorful china are even cemented into the walls.

Moreover, the house is decorated with beautiful porcelain decorations from the inside; on the ceilings  and walls. 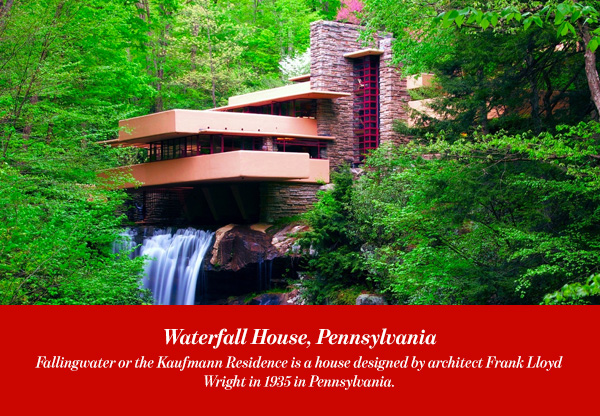 Fallingwater or the Kaufmann Residence is a house designed by architect Frank Lloyd Wright in 1935 in Pennsylvania.

One problem of building was that the location of the north bank of Bear Run was not large enough to provide a foundation for a typically built house.

And so the architect designed a house built into the active waterfall on site.

The home was built partly over a waterfall, it was designated a national historic landmark 1966. 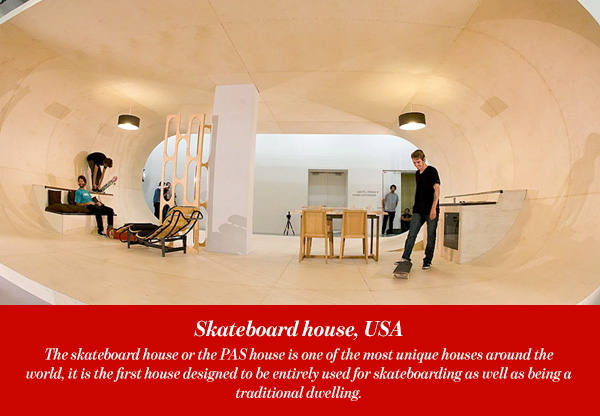 The skateboard house or the PAS house is one of the most unique houses around the world, it is the first house designed to be entirely used for skateboarding as well as being a traditional dwelling.

The client and visionary of the project is Pierre Andre Senizergues (PAS), a former World champion and Pro Skater and the founder of Etnies.

You will be able to skate on any areas and surfaces In this house, indoor and outdoor.

Each space is skateable as the ground becomes the wall then the ceiling in a continuous surface forming a tube. Even the furniture in this house is skateable.