Arabic culture has given the world some of the most beautiful architectural masterpieces. Meticulous details and ornaments are the signature and unique features of Arabic architecture.

Ranging from ancient to new, here are some buildings that truly show the magnificence of Arabic architecture.

The Dome of the Rock, Jerusalem, Palestine 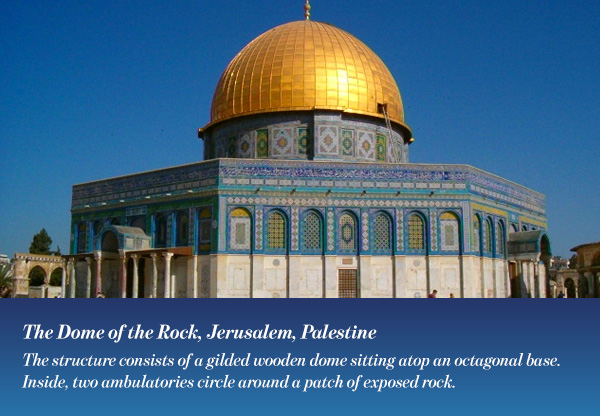 It has been called “Jerusalem’s most recognizable landmark and it is a UNESCO World Heritage Site, The Dome of the Rock is in its core one of the oldest extant works of Arabic architecture.

Built in 691–692, about 55 years after the Arab conquest of Jerusalem, the design and ornamentation are rooted in the Byzantine architectural tradition but also display traits that would later come to be associated with a distinctly Islamic architectural style.

The structure consists of a gilded wooden dome sitting atop an octagonal base. Inside, two ambulatories circle around a patch of exposed rock. The interior is richly decorated with marble, mosaics, and metal plaques. 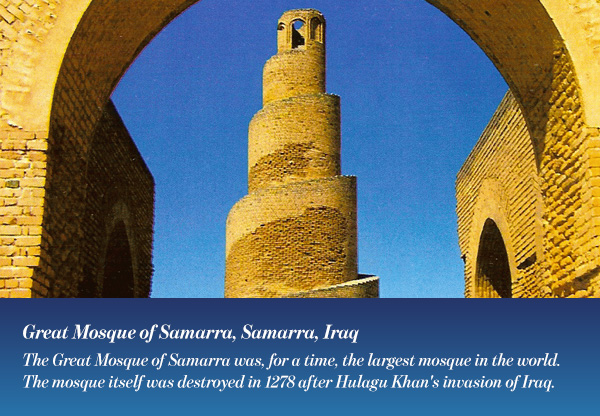 The Great Mosque of Samarra is a 9th century mosque that was completed by Abbasid caliph Al-Mutawakkil.

Its most remarkable feature is its minaret, the Malwiya Tower, which is a vast spiraling cone 52 meters high and 33 meters wide. The spiral contains stairs reaching to the top. The word “malwiya” translates as “twisted”.

The Great Mosque of Samarra was, for a time, the largest mosque in the world. The mosque itself was destroyed in 1278 after Hulagu Khan’s invasion of Iraq. Only the outer wall and its minaret remain. 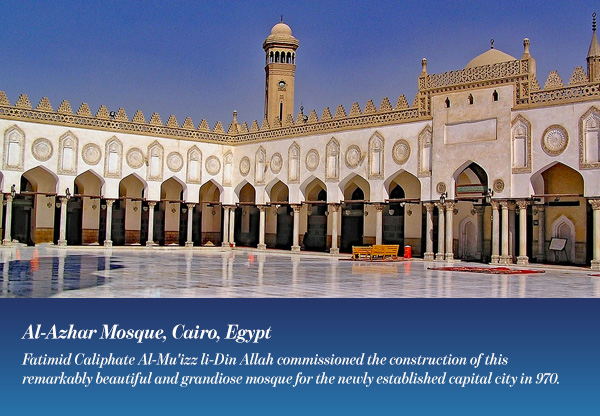 Fatimid Caliphate Al-Mu’izz li-Din Allah commissioned the construction of this remarkably beautiful and grandiose mosque for the newly established capital city in 970. It was the first mosque established in Cairo, a city that has since gained the nickname “the City of a Thousand Minarets.

It was originally designed to be a prayer hall with five halls and a modest courtyard, the mosque has since been expanded multiple times with additional installations completely surrounding the original structure.

Many of Egypt’s rulers have shaped the art and architecture of al-Azhar, from the minarets added by the Mamluks and the gates added during Ottoman rule to more recent additions.

Almost none of the original minarets or domes have survived, with some of the current minarets having been rebuilt several times.

Later additions from the different rulers of Egypt show influences from both within and outside of Egypt. But Al-Azhar stands to be one of the most magnificent examples of Arabic architecture. 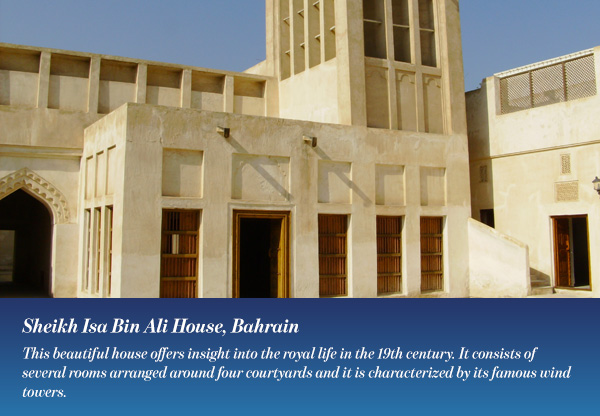 Considered to be one of the most impressive examples of Arabic architecture on the island, The House of Sheikh Isa bin Ali Al Khalifa was his residence and also the seat of his government.

This beautiful house offers insight into the royal life in the 19th century. It consists of several rooms arranged around four courtyards and it is characterized by its famous wind towers.

If you want to see traditional Arabic architecture in a beautiful old building, this is one of the best places in Bahrain. 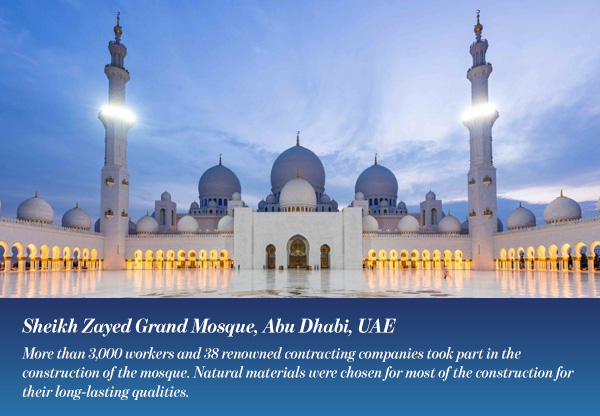 Sheikh Zayed Grand Mosque is considered to be the key site for worship in the country. The design of the mosque was done by a Syrian architect named Youssef Abdelky.

The project was launched by the late president of the United Arab Emirates, Sheikh Zayed bin Sultan Al Nahyan, who wanted to establish a structure that would unite the cultural diversity of the Islamic world with the historical and modern values of architecture and art.

The Mosque’s design and construction unites the world, using artisans and materials from many countries around the world.

More than 3,000 workers and 38 renowned contracting companies took part in the construction of the mosque. Natural materials were chosen for most of the construction for their long-lasting qualities.

The design of the minarets is a classic example of Arab architecture while some other attributes are more international. The dome layout and floor plan of the mosque was inspired by the Indo-Islamic mosque architecture, particularly the Badshahi Mosque in Lahore, Pakistan.

The pools along the arcades reflect the mosque’s spectacular columns, they offer a glorious view at night. The unique lighting system was designed by lighting architects Speirs and Major Associates to reflect the phases of the moon. Beautiful bluish gray clouds are projected in lights onto the external walls and get brighter and darker according to the phase of the moon.

Moreover, The 96 columns in the main prayer hall are clad with marble and inlaid with mother of pearl, this mosque is one of the few places in the world where you will see this craftsmanship. 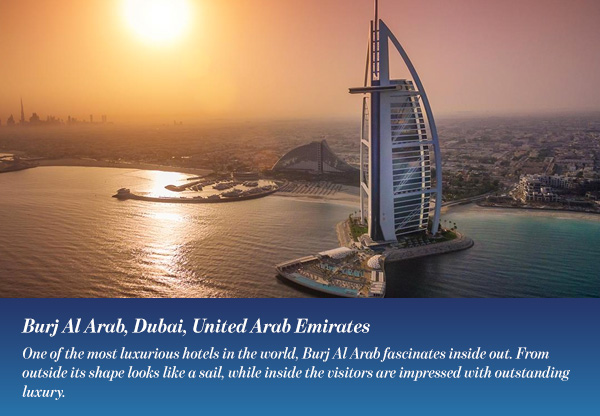 One of the most luxurious hotels in the world, Burj Al Arab fascinates inside out. From outside its shape looks like a sail, while inside the visitors are impressed with outstanding luxury.

Burj Al Arab was designed by multidisciplinary consultancy Atkins, led by architect Tom Wright, who has since become co-founder of WKK Architects. 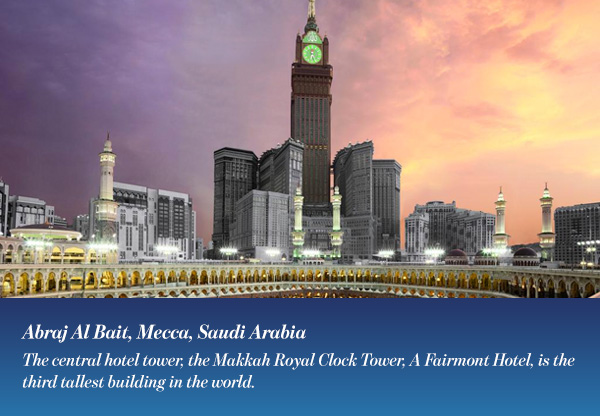 Translated as “The Towers of the House”, Abraj Al-Bait is a complex of seven skyscraper hotels in Mecca, Saudi Arabia.

The central hotel tower, the Makkah Royal Clock Tower, A Fairmont Hotel, is the third tallest building in the world.