Unusual Architecture: The Most Unique Hotels in The World

Summer vacation is just around the corner, have you planned your holiday yet? Do you need some inspiration? Do you prefer fancy or unique hotels?

We have some unusual and unique hotels here for you, check them out, you may even be tempted to try something different. 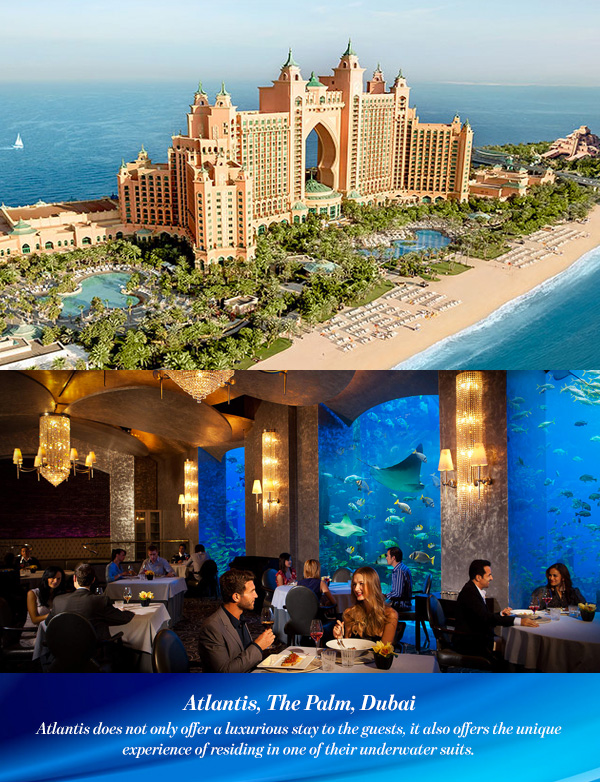 Located in a manmade island, this hotel is an aquatic wonderland by the sea, and one of the most unique hotels in the region.

Atlantis does not only offer a luxurious stay to the guests, it also offers the unique experience of residing in one of their underwater suits.

The underwater suits feature floor to ceiling windows with panoramic underwater views, who can ask for more? 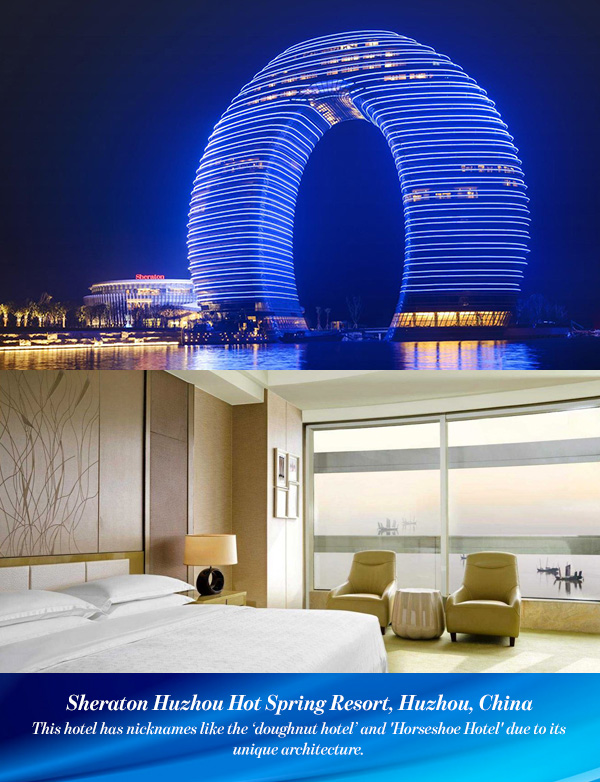 This hotel has nicknames like the ‘doughnut hotel’ and ‘Horseshoe Hotel’ due to its unique architecture.

The hotel is on Lake Tai in between Nanjing and Shanghai. The mind behind this masterpiece of architecture is the renowned Chinese architect  Yansong Ma.

The hotel comprises of 27 floors above water, and two below, this creates a complete oval.

As marvelous in the inside as it is from the outside, the hotel features luxurious decorations, including a lobby paved with White Jade from Afghanistan and Tiger’s Eye Stone from Brazil. 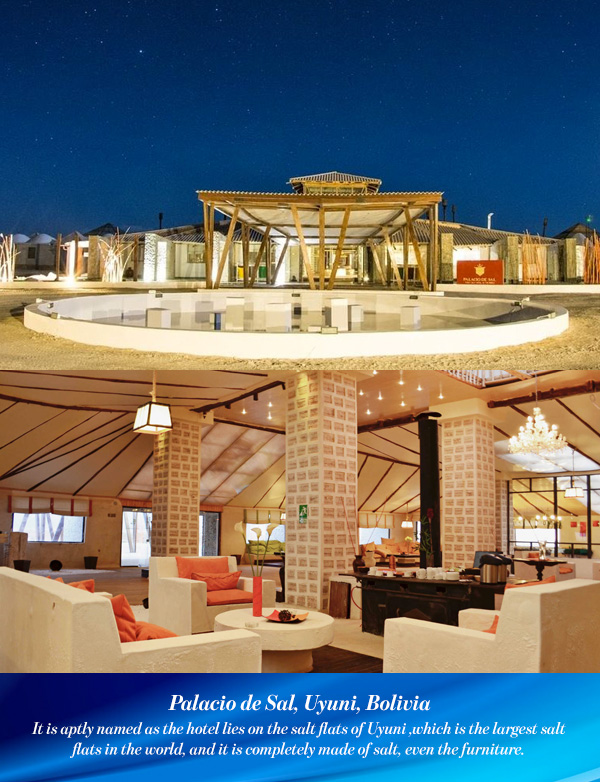 The name of this hotel  ‘Palacio de Sal’ means  Salt Palace. It is aptly named as the hotel lies on the salt flats of Uyuni ,which is the largest salt flats in the world, and it is completely made of salt, even the furniture!

The unique hotel offers lots of amenities just like other hotels, there is an impressive lobby, rooms with private bathrooms, dry sauna, a steam room and a saltwater pool. 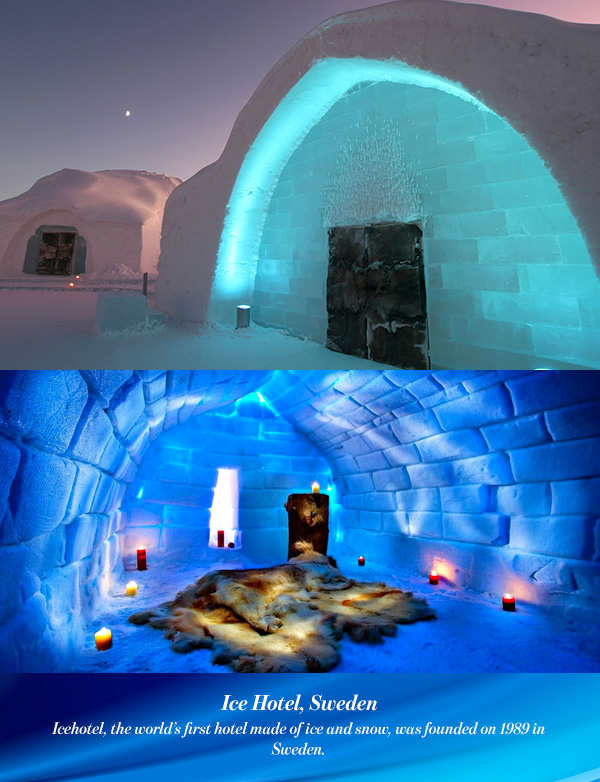 Icehotel, the world’s first hotel made of ice and snow, was founded on 1989 in  Sweden. It is certainly one of the most unique hotels in the world.

The hotel lies 200 km north of the Arctic Circle, and every November, ice from the frozen Torne river is fused with snow to remake the hotel.

Every year, artists from all over the world come together in the village to take part in creating the new Icehotel, they come with the first snow.

The team behind the hotel has, as of 2017, opened their first permanent hotel, Icehotel365, This ice experience can be visited year-round and is cooled by solar panels during the summer months. 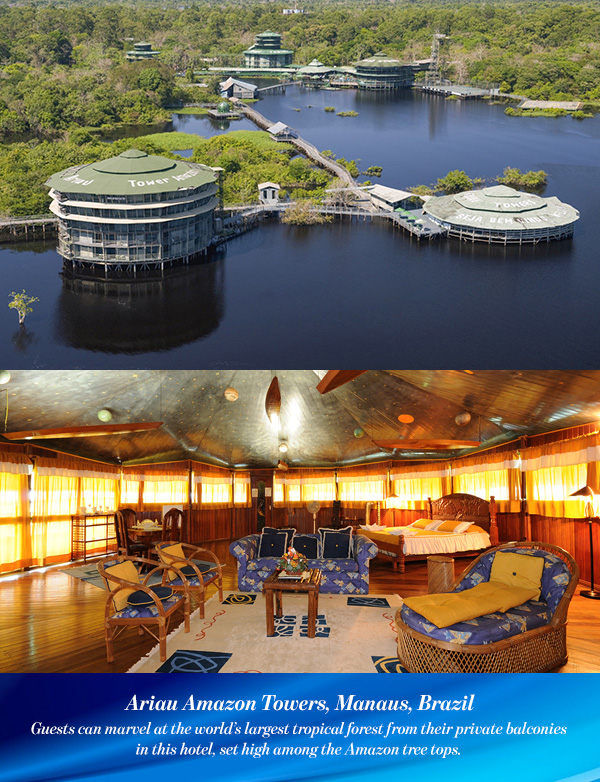 Guests can marvel at the world’s largest tropical forest from their private balconies in this hotel, set high among the Amazon tree tops.

People have described this unique hotel as the ultimate treehouse!

Other facilities in the hotel include treetop swimming pools, restaurants and five miles of canopy-skimming walkways.

Providing even more entertainment to the tourists, macaws and various breeds of monkeys are common around the towers. 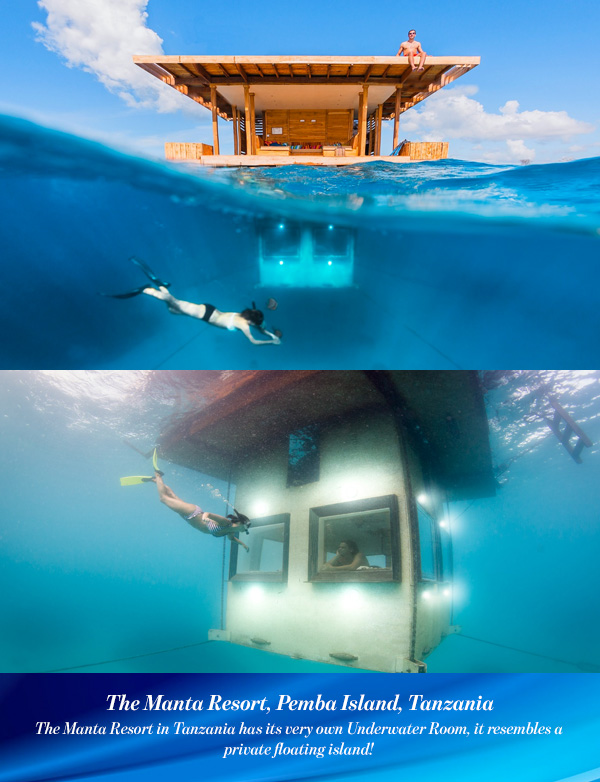 The Manta Resort in Tanzania has its very own Underwater Room, it resembles a private floating island!

The floating suit consists of three levels, including a roof which is perfect for sunbathing  by day and star gazing by night.

The below-sea level bedroom offers one of the most unique sleeping experiences ever, the surrounding windows offer a panoramic view of the underwater world. 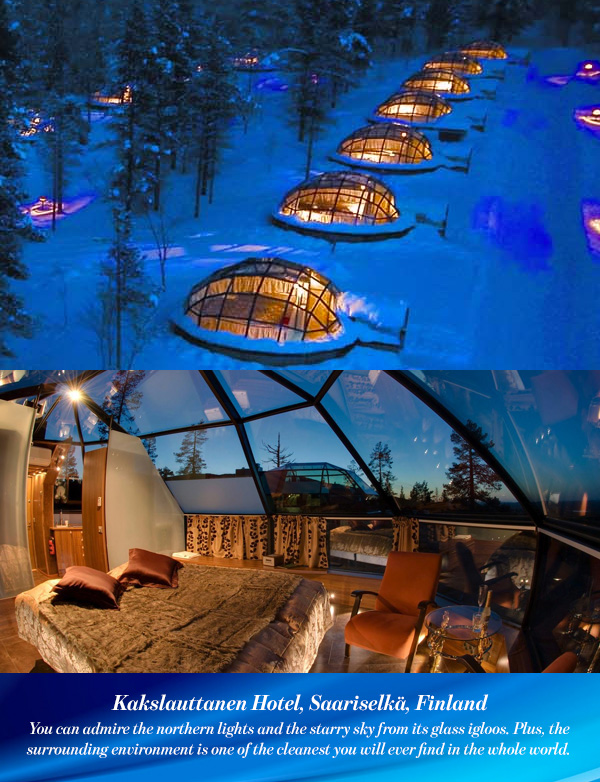 250 kilometers north the arctic circle, along the road to the arctic sea, lies this extraordinary hotel.

You can admire the northern lights and the starry sky from its glass igloos. Plus, the surrounding environment is one of the cleanest you will ever find in the whole world.

The glass igloos are open during northern lights season, from the third week of August until the end of April. 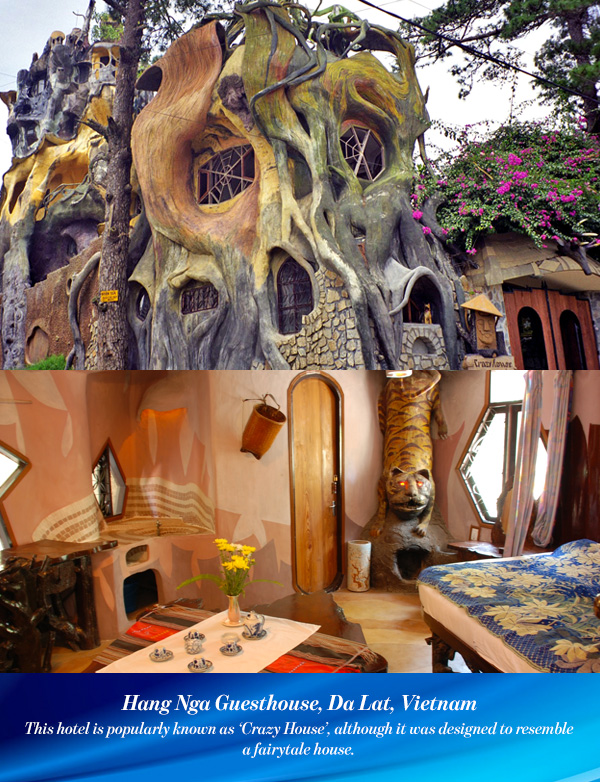 This hotel is popularly known as ‘Crazy House’, although it was designed to resemble a fairytale house.

The unconventional building was  designed and constructed by Vietnamese architect Dang Viet Nga.

The building’s exterior resembles a five-story-high  tree, with unevenly shaped window openings and branch-like structures that rise above the roof into the sky.

The guesthouse offers themed guest rooms, each one having an animal as its theme, such as the tiger room, the eagle room, the ant room and the kangaroo room, each with decorations matching the theme.