Let’s take a tour among some of the most spectacular mosques in Bahrain, from Al Fateh Grand mosque to Khamis mosque, and learn all about the history of Islamic Architecture in the kingdom.

The mosque is not just the place where Muslims pray, it is also a place where they learn about religion, and an architectural monument that stands as a symbol. Mosques often feature elegant domes, carved minarets, and spacious prayer halls, all built in diverse architectural styles. And Bahrain mosques are no different.

The kingdom of Bahrain features several stunning mosques, some ancient, some contemporary, but all equally impressive. Here are some of the most impressive Bahrain mosques. 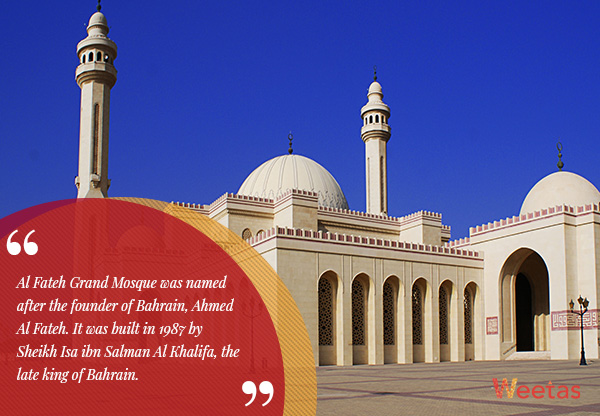 Al Fateh Grand Mosque was named after the founder of Bahrain, Ahmed Al Fateh. It was built in 1987 by Sheikh Isa ibn Salman Al Khalifa, the late king of Bahrain.

Spreading over an extensive area of 6,500 square meters, Al Fateh Grand Mosque is the largest place of worship in Bahrain and one of the largest mosques in the world. It can accommodate up to 7,000 worshipers at a time.

The massive dome on top of the mosque is constructed entirely of fiberglass. It is the largest fiberglass dome in the world. The floors are made of Italian marble and the grand chandelier was brought from Austria. The calligraphy writings throughout the mosque are written in a very ancient font called bahrain.

In 2006, a library was added to the mosque, The library of Ahmed Al-Fateh Islamic Center features around 7,000 books, some of them are 100 years old, and some even older than that.

One of the most popular tourist attractions in Bahrain due to its wonderful Islamic architecture, Al Fateh Grand Mosque is open for visitors. You can visit the mosque any day except Friday when it is open only for worshipers. Tours of the mosque and the library are available in many languages. 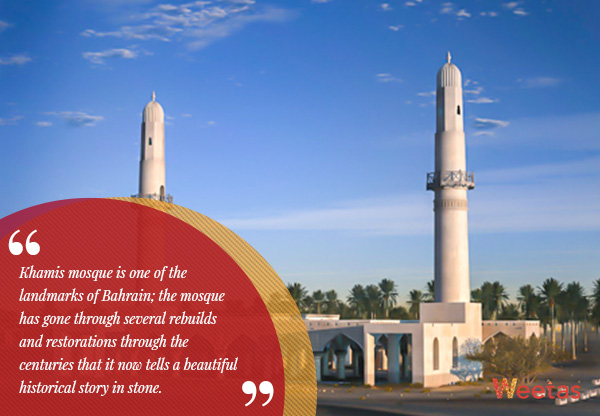 Although there are conflicting theories on exactly when this mosque was built, it is a commonly agreed upon fact that it was the first mosque to be built in Bahrain and one of the oldest mosques in the Gulf region.

One of the known facts about the mosque as well is that the two minarets were not built at the same time, they were built two centuries apart.

The mosque has recently been partially restored, taking into consideration the original building materials and the original architectural style.

Khamis mosque is one of the most renowned landmarks of Bahrain; the mosque has gone through several rebuilds and restorations through the centuries that it now tells a beautiful historical story in stone. 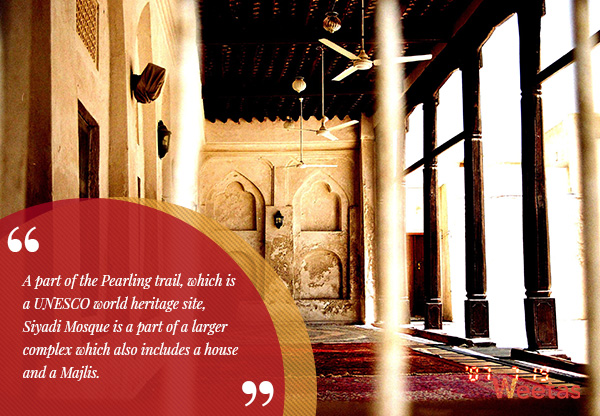 A part of the Pearling trail, which is a UNESCO world heritage site, Siyadi Mosque is a part of a larger complex which also includes a house and a Majlis.

Siyadi Mosque, which Isa and Jassim bin Yousif Siyadi donated to the Muharraq community in 1865, is the oldest part of the complex. It has been renovated several times since then, and the structures present now, which is still used for daily prayers, dates to 1910.

A historical landmark and a heritage site, Siyadi Mosque is the oldest preserved mosque in Muharraq and one of the oldest Bahrain mosques. 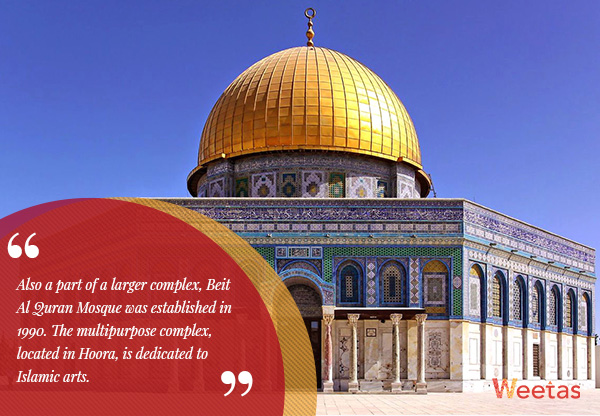 Also a part of a larger complex, Beit Al Quran Mosque was established in 1990. The multipurpose complex, located in Hoora, is dedicated to Islamic arts. It includes a museum, a mosque, a library, an auditorium, and a school.

The Islamic architecture of the complex is inspired by a traditional 12th-century mosque. A huge intricately designed stained glass dome covers the grand hall and mosque. Inside the mosque, the Mihrab indicating the direction to The Holy Mosque in Mecca is lined with beautiful blue ceramic tiles engraved with Al Qursi Quranic verse. 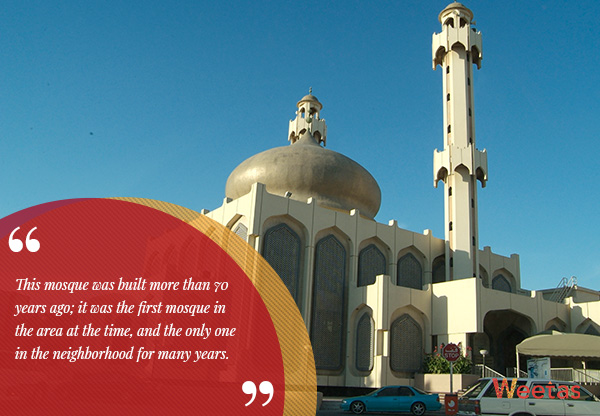 This mosque was built more than 70 years ago; it was the first mosque in the area at the time and the only one in the neighborhood for many years.

The mosque has been rebuilt and renovated several times since then, the latest of which is this year when a second floor was added to the mosque so it would be able to accommodate more worshipers. 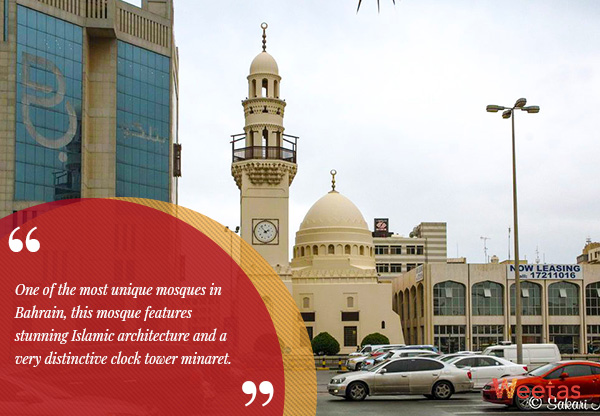 One of the most unique mosques in Bahrain, this mosque features stunning Islamic architecture and a very distinctive clock tower minaret.

The mosque lies in the old part of Manama, near Bab Al Bahrain; it is a very famous landmark there. The exceptional mosque was designed by the renowned architect Abdel-Wahid El-Wakil.

For more about architecture in Bahrain see also: