Seeing Blue: 7 of the most amazing diving sites in GCC region

It is embedded in our nature, as human beings, to explore; for better or worse, curiosity, partially or totally, has always been an integral motive behind most, if not all, of our actions.

While there are many intriguing exploring activities out there, diving has always preserved a unique status among its counterparts, so unique that it has become a synonym of getting to explore something new with all of your abilities and focus.

In the recent years, the Middle East in general and the Arabian Peninsula specifically have gained prominence as the home of some of the most amazing diving sites in the world despite being mostly known as a desert region. This can be attributed to the fact that, by definition, the Arabian Peninsula is surrounded by the seawater from three sides; plus, the abundance of ship wrecks, reefs, magnificent water caves and sea creatures in the Arabian Gulf, the Red Sea and the Indian Ocean that are encompassing the peninsula makes the diving sites in GCC region a perfect haven for diving lovers.

We here introduce you to 10 of the most amazing diving sites in GCC region: 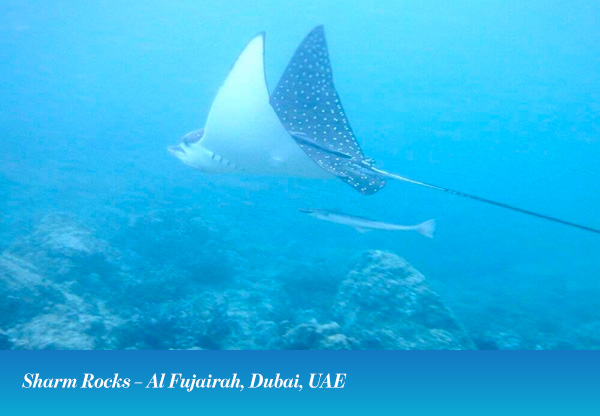 A site that is considered to be perfect for night or late day dives, Sharm Rocks site is made of three pinnacles that are full of marine life with a long wide crack running along their top.

If you are an experienced diver, there is a fourth rock that is located at the site that normal diving trips do not usually go to. The creatures that inhabit the site include turtles, banner fish, cuttlefish, jawfish, pufferfish, eagle rays and reef sharks. 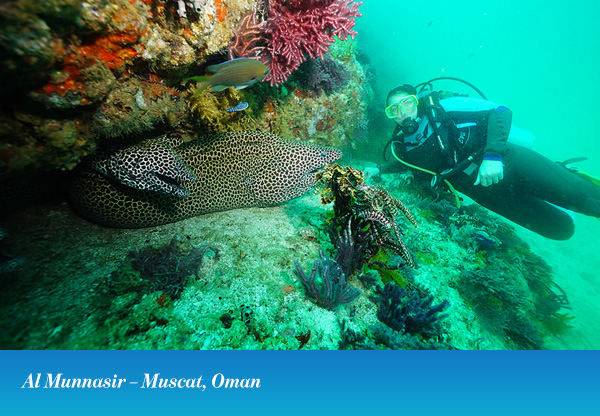 Lying at the depth of 100 feet (30 meters) under the water surface half an hour away from Oman Dive Center, Al Munnasir was sunk by the Omani royal navy in 2003 to be used as a man-made reef. Ever since then, this still-intact 276-feet long vessel has been a prominent attraction and the home of numerous schools of snapper fish and goatfish and is considered one of the most attractive diving sites in GCC region. 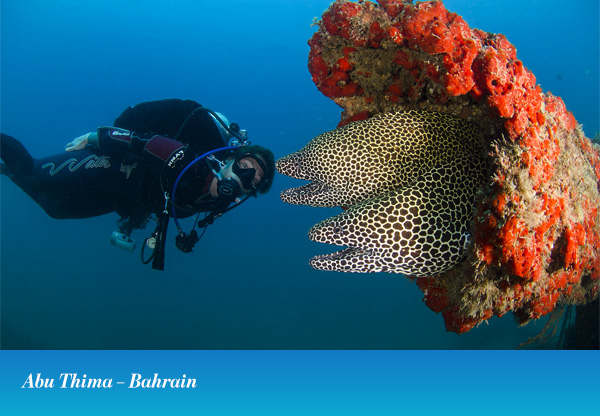 An attractive diving site with depths that range from 8 to 30 meters, Abu Thima is located 80 kilometers north of Al Muharraq and it features a huge pinnacle covered in coral that houses numerous sea creatures like sea turtles, eagle rays and moray eels.

The site acts as an attraction not only for both experienced and novice divers but also for endless schools of tropical fish. If you are planning a trip to Bahrain especially during summer or autumn, visit Abu Thima to get the best diving experience there as the water visibility is at its best during these two seasons. 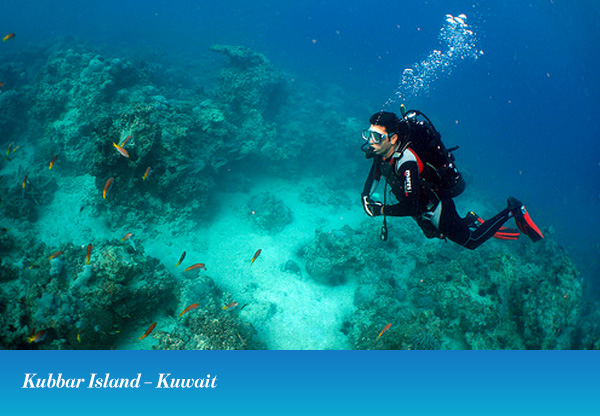 Located 30 kilometers off the southern coast of Kuwait, this spectacular island is all surrounded by magical coral reefs with the stunningly clear water depths ranging from 4 to 14 meters. The shallow waters serve as the home of colorful radiant fishes like nudibranchs and damselfish while the sea tiniest creatures can always be seen as they peek out of the small holes in the reef.

It is advised to visit this site for diving in summer and early autumn where you will be able to encounter both soft and hard corals on the reefs. 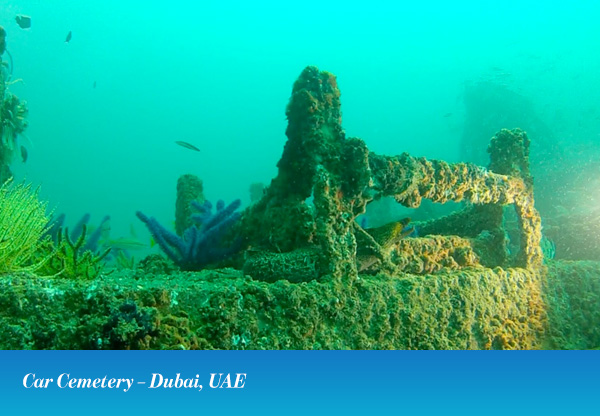 Now, you might be thinking that this is the strangest name you ever heard of for a diving site and this is probably because it is. Nevertheless, this site – mainly due to its nature after which it has been named – offers a real challenge for the diving.

An artificial reef that was laid out by sinking more than 200 wrecked cars – that were reduced to about 50 cars 3 decades and 2 cyclones later – over the total area of 60 square meters back in the 80s, the Car Cemetery is very hard both to locate and navigate under water as there are no striking features in the cars. ‘

However, the site’s vibrant marine life and various sea creatures that are inhabiting the wrecked cars certainly pay off and make this site one of the outstanding diving sites in GCC region and the whole world. 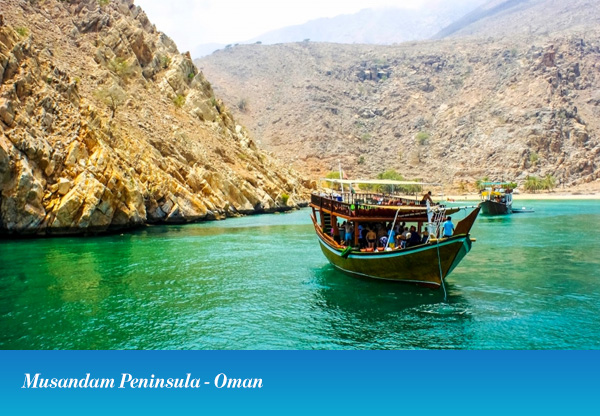 Although Musandam is technically a part of the Sultanate of Oman, diving in it is usually done from the UAE as it is not accessible to the rest of Oman by land. This peninsula is uninhabited safe for a few villages in its pocket beaches and it is considered one of the most famous diving attractions in the region.

Musandam features a mountainous coastline with the height of 2,100 meters above the sea level and an unprecedented view of the Strait of Hormuz; the peninsula offers stunning sights not only in land but also below the water in the form of its diverse marine life and colorful corals along with the multiple small islands that are close to the main coastline like Shark Island and Lima Rock, all of this makes Musandam the best diving site in Oman one of the best diving sites in GCC region. 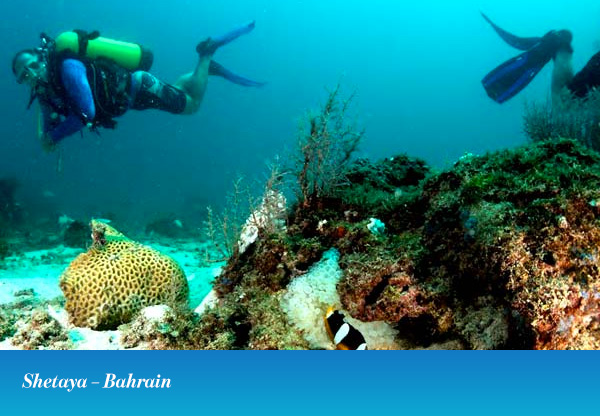 Located 60 kilometers north of Al Muharraq, Shetaya has a maximum depth of 12 meters where you will not be able to spot a lot of different forms of marine life. However, Shetaya is a renowned pearl diving site as it is famous for having a flat seabed that is rich with delicious oysters of which you can pick up as many as you can; this rule applies to the pearls too, meaning that if you were lucky enough to find a pearl during your dive, it is totally yours to keep.

There is another whole living world under the sparkling blue surface of the waters that is best experienced firsthand, and diving, of course, is the main key to that experience. If you are traveling to any of the GCC countries soon, make sure you check the diving sites in the city and go through an adventure that you certainly will not regret.